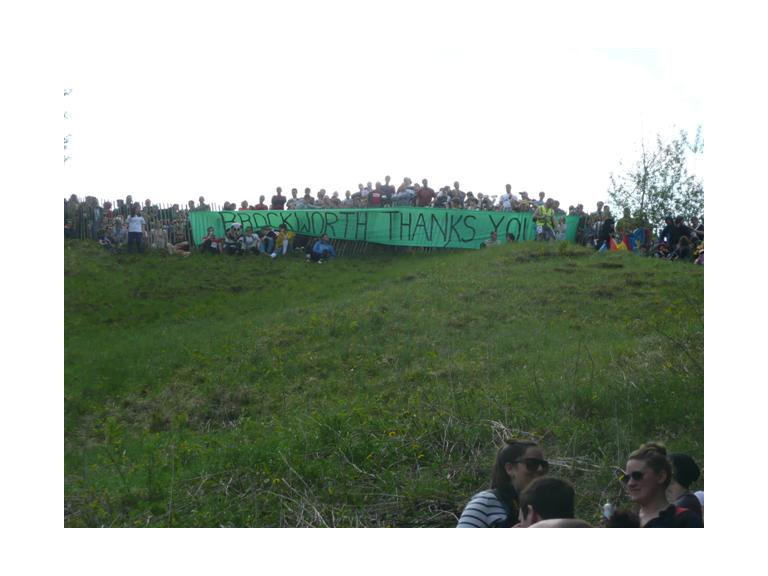 The annual Cheese Rolling took place this year in Brockworth, despite warnings from the Police & Local authorities. For more photo's visit the Cheese Roll website - http://www.cheese-rolling.co.uk/index1.htm

What are your views? Should it continue?

'Article from the BBC

Thousands of people have gathered in Gloucestershire for the traditional cheese-rolling races on Cooper's Hill.

The unofficial event has taken place despite warnings from police that organisers could be liable for legal action in the event of an incident.

An estimated 3,000 people turned out to watch thrill-seekers chasing a foam copy of a double Gloucester cheese.

The tradition, which takes place near Brockworth, Gloucester, dates back to at least the early 19th Century.

This year organisers replaced the cheese with the lightweight foam version in order to make the downhill race safer.

The event has taken place unofficially every year since 2009

Winner of the first race, Kenny Rackers, 27 - an estate agent from Colorado Springs in the US - said he came over especially for the event, a journey of some 4,000 miles (6,400km).

"I trained a long time for this and got hurt on the hill practising. I came three days early and I took a bad spill, but I came to win and that's what I did," he said.

The second race was won by Australian traveller Caleb Stalder, who is currently living in London.

"You can't control yourself whatsoever so it's a case of rolling down and seeing where you end up," said the 30-year-old, from Taree near Newcastle in New South Wales.

"I can't believe I got the cheese. It's awesome. I wasn't anywhere near being first down and the cheese took a bit of a turn and I caught it," he added.

The women's race and third men's race were won by competitors from Brockworth with the fourth race won by a man from Japan who had dressed as a ninja.

Some 15,000 people turned out for the last official event in 2009, sparking concern over numbers as Cooper's Hill is said to be suitable for about a third of that number.

Every year since then unofficial races have been organised during the late spring bank holiday by local enthusiasts.

Gloucestershire Police confirmed earlier it had given advice to those who took part in planning the unofficial event.

"We feel it is important that those who, by law, could be constituted as organisers of the event, that they are aware of the responsibilities that come with it so that they can make an informed decision about their participation," a force spokesperson said.'

Hi there! Welcome to our blog site ...
I would welcome your comments - please feel free to fire away with any topics you would like to discuss!

RARE CHANCE TO OWN A BRAND NEW BUNGALOW
Sign up for offers
Sign up for what's on guide
Popular Categories
By clicking 'ACCEPT', you agree to the storing of cookies on your device to enhance site navigation, analyse site usage, and assist in our marketing efforts.
For more information on how we use cookies, please see our Cookie Policy.