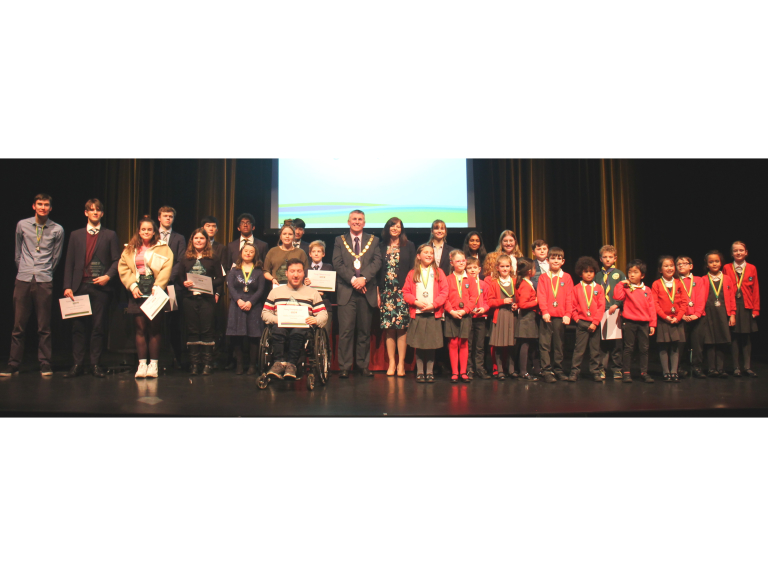 Many young people give up their time and effort to make Epsom and Ewell a better place. Epsom & Ewell Borough Council think it’s important to recognise these special individuals.

The winners of the 2020 Epsom and Ewell Young Champions were announced at a ceremony at Epsom Playhouse on Monday (24 February).

The winners of each category were presented with a trophy and special certificate.

Fundraiser Award – sponsored by What’s On In Epsom

This award is given to an individual or group who has made a fantastic effort to raise funds for a good cause in an innovative and creative way.

The Cub Pack decided to not have a Christmas party and instead spent weeks preparing games and activities to entertain friends and family and raise money for a local charity called Rianna's Fund. They raised over £485, a fantastic achievement.

This award is given to a young person or group of young people who have provided a service to improve the environment for the benefit of their local community.

Joshua willingly gives up his lunchtime every day to work in The Vale Primary School eco garden.

This award is given to a young person or group who has provided outstanding community and voluntary service, or has made a significant contribution to the life of a fellow resident.

Epsom College students dedicated over 13,500 volunteering hours to local projects in over 40 different placements. This is in addition to the 994 hours of volunteering last term, which has also supported 25 Duke of Edinburgh students. Placements are organised by the school’s service coordinator, who creates weekly one-hour placements as part of the pupil’s timetable, or as a one off project.

Carer Award – sponsored by Home Instead

This award is given to a young person who regularly goes out of their way to help other people or has caring responsibilities and has demonstrated outstanding care for a family member or friend in need.

Our winner is a friendly and caring young member of Epsom and Ewell Phab club. She is always willing to help at the club with those who are younger or who have particular special needs. At home she provides care and support within her family This was particularly important when her Mum was in hospital in London for a long stay. Abi remains cheerful and positive throughout whatever comes her way, with a great attitude and maturity way beyond her years.

This award is given to a young person who has excelled in their commitment to sport through hard work and determination as an individual, also overcoming personal challenges.

As Sutton and Epsom's under 15's captain, Chloe has led a successful campaign at her school, Blenheim High School, to have rugby introduced to the curriculum for girls. Chloe showed initiative and passion and fought for equality at her school so that her fellow students could enjoy the sport she loves so much, no matter their gender. Her achievement has seen England Rugby recognise her efforts.

This award is given to a young person or group who has made a difference in their community through giving their time and best efforts voluntarily for the benefit of others.

Miranda is a volunteer at Stoneleigh Community Library on Saturday mornings. She has shown real commitment towards her role, which has been exceptionally challenging for her as she is on the autistic spectrum and therefore finds social situations more difficult than other young volunteers.

This award is given to a young person who has shown courage, bravery, determination and strength during unimaginable circumstances and is an inspiration to others.

Lewis was diagnosed with Stage 4 Burkitts Lymphoma in February 2015 and subsequently underwent six months of intensive chemotherapy. Since his treatment, he has supported The Royal Marsden Cancer Charity and amassed over £125K, generating the construction of a new garden at the hospital to ensure children get the outside space they need during treatment, which wasn’t available when he was ill.

Dom has developed strengths and skills to get around and get on with life due to being born with Spina Bifida. He is an inspiration to able-bodied and mobility impaired people with whom he comes into contact. He had to compete for one of ten borough spaces at the world scout jamboree in the USA against 49 nominees by showing leadership and scouting skills and knowledge. 45,000 scouts attended from around the world. When there he impressed the mountain bike course organisers and other wheelchair users by his prowess on his mountain trike.

Kathryn Beldon, Chief Executive of Epsom & Ewell Borough Council, thanked all the nominees and winners for their positive contribution to the borough, adding “The Epsom and Ewell Young Champions Awards are about recognising the outstanding achievements of the brilliant young people in our borough.

“When we think about role models, we tend to think about historical figures, celebrities or individuals who have spent decades honing their skills. But there are young members of our community who have already made a positive impact and are some of the most important role models within the borough who should be celebrated”.

The Epsom and Ewell Young Champions Awards were instigated last year, and nominations for this year’s awards were received from individuals, local charities, schools, volunteer groups and youth organisations.