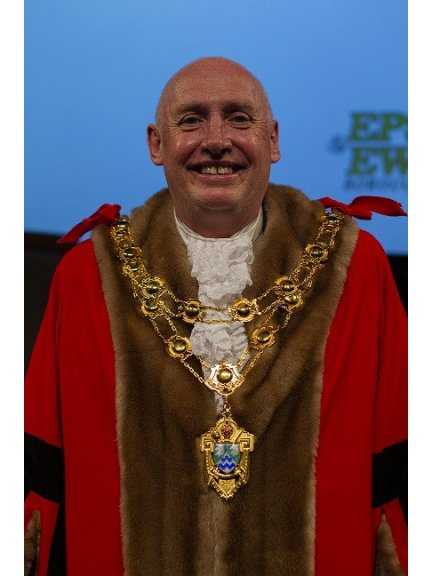 Epsom & Ewell Borough Council has announced that Peter O’Donovan has been appointed the new Mayor.

Peter was first elected as a Borough Councillor in 2015 for Ewell Court Ward. He has served on various council committees, most notably on Planning for six years, and spent a year as Chair of the Environment Committee.

Peter is 60 and has worked in the finance sector since leaving school. He joined Lloyds Bank and made his way up to the position of branch manager before leaving in 1997. Since then, his career has included working with comparison website MoneyExtra; managing the assets for the old Bradford & Bingley and Northern Rock in UKAR; and as a mortgage advisor. He is currently a self-employed equity release advisor.

Peter is a keen sportsman and helped run Eoin’s football team at AFC Ewell for a few years. He enjoys taking part in musical theatre and has performed at the Epsom Playhouse and other local venues, including the Wimbledon Theatre and the Fairfield Halls. It was whilst playing Alfred P Doolittle in My Fair Lady at the Secombe Centre that he met Sarah.

On becoming Mayor, Peter said: “Epsom and Ewell is a special place; successful, welcoming, inclusive – the ideal environment to bring up a family and to run a business. My aim as mayor is to give something back to the borough I call home and to meet and thank the people who contribute so much to our community”.

Peter will be using the opportunity to raise funds and recognition for three organisations that mean a great deal to him. These are…

The Mayor is the first citizen of the Borough of Epsom & Ewell and has several specific roles during their one-year term of office. These include representing the Council and the local community at formal and ceremonial occasions, both within the borough and elsewhere, and chairing full meetings of the Council. During the mayoral year the Mayor is strictly politically neutral and the work representing those in their ward is undertaken by the other ward councillors.