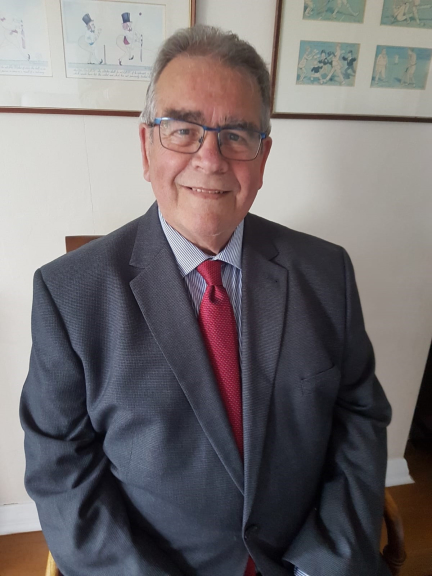 Councillor Humphrey Reynolds has been formally recognised as the new Mayor of Epsom and Ewell for the next year.

The Mayor said, "Being elected as the first citizen for Epsom and Ewell is a great honour.

“I start my mayoral year with some trepidation and my mayoral assignments within these strange times may be slightly different to those of my predecessors. These are difficult times for all of us. Anxiety and fear may be common feelings at the moment, but I strongly believe that as individuals and as a borough we can look to the future with optimism.

“One thing I wish to emphasise is the thanks from the people of Epsom and Ewell to the numerous charities, organisations and volunteers within the borough who are currently doing such a magnificent job in the present unprecedented circumstances”.

Councillor Reynolds has been serving the local community as a Ewell councillor for the last nine years. He was first elected as a Borough Councillor in 2011 and has served on many different council committees, including seven years on the Planning Committee, which he chaired for five years.

Humphrey was brought up in South West London and 1969 married Gillian. The couple moved to West Ewell in 1972 and to Ewell Village in 1988 where they still live. He spent most of his professional life in the printing industry before taking up a post with the council in 1999, working at Bourne Hall. Retiring in 2010, he successfully stood for election the following year.

Humphrey served as a Governor of Danetree School for 21 years, five of those years as Chair of Governors. He also spent five years as a Governor at Epsom and Ewell High School. He was also a Trustee of Age Concern Epsom & Ewell for over 10 years.

The Mayor is the first citizen of the borough and has several specific roles during their one-year term of office. These include representing the council and the local community at formal and ceremonial occasions, both within the borough and elsewhere, and chairing full meetings of Council.

For his mayoral year, the Mayor has selected the following three Epsom and Ewell organisations as his chosen charities, all of whom are currently providing Covid-19 support to the local community:

A local independent charity established in 1947 to empower older people and combat loneliness. Supported by over 240 volunteers, they provide drivers, companions, toenail cutting, social interaction and a free and confidential information and advice service. www.ageconcernepsom.org.uk

Part of the Community Foundation for Surrey, the fund enables and encourages local giving to support local communities to develop and thrive by supporting voluntary effort across all sectors. www.cfsurrey.org.uk/fund/epsom-ewell-community-fund

Love Me Love My Mind

Love Me Love My Mind is a small charity which aims to promote better understanding of mental health and to support the wellbeing of everyone in the community. They are run entirely by volunteers and funded by grants and donations. They provide a number of support services and runs the popular annual educational festival, Epsom Mental Health Week. www.lovemelovemymind.org.uk