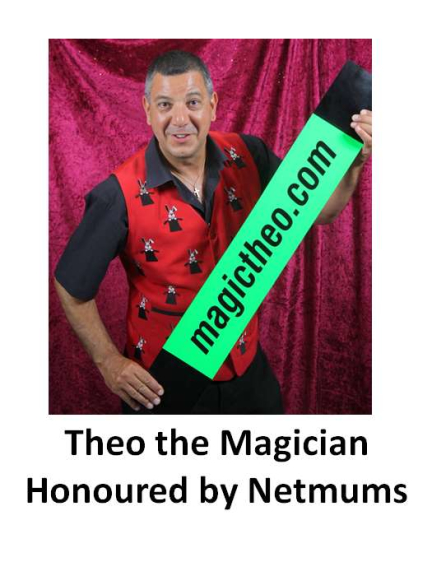 The popular Interactive Surrey and London Magician Theo The Magician who entertains both children and adults and who is based in Sutton was voted runner up as The Greater London region’s best in the national party awards from the UK’s largest parenting site Netmum's.

Dubbed the UK’s ‘Parenting Oscars’, more than a million parents and child carers were eligible to vote for the huge UK-wide prize.

But the Surrey and London Entertaining Magician Theo beat hundreds of rival Magicians from right across the area. As a runner up, Theo The Magician will now get free advertising on the parenting site and a special certificate as well as the knowledge that he is a Netmum’s favourite

Theo The Magician started entertaining over 20 years ago when fundraising and organising parties for Special Needs Groups when a member of the Rotaract Club (younger version of Rotary). It all started with Balloon Modelling, then Children’s Party Shows to Close Up Magic at Dinner Banquets, Rotary Dinners, Weddings and special celebrations. Surrey Magician Theo use to work for the British Sports Association for the Disabled as a County Development Officer in Buckinghamshire. Theo is also an avid community supporter and has raised over £75,000+ for charities. In the last 10 years raising over £20,000 for the Neonatal Unit at St Helier Hospital Carshalton where his daughter Elena was cared for weighing 2 lbs and ten weeks early. Theo is also a past Surrey Close Up Champion and very recently (a few days ago) won the South London Close Up Magic Championships.

Over the moon Theo said: “I put on parties for everyone else but we will be holding one after being a runner-up! It’s fantastic news and I am so proud local parents love what I do and want the rest of the country to know about us too".

“The award makes all the hard work worthwhile and proves that a local business like mine can get national recognition.”

The national Netmum’s awards were set up to recognize the best companies in the growing children's party market, which is now worth a whopping £750 million a year in the UK. Categories included favourite Party Entertainers, Party Suppliers and Venues – with winners and runners-up in each category being crowned the best in each of 12 national regions.

Netmum’s founder Siobhan Freegard said: “Putting on parties for little ones is very big business and the competition has been intense, but Theo The Magician stood out. Parents couldn’t praise him enough.”

But not just for kids – anyone who has attended our “An Evening With” networking events will know Theo. He is a true entertainer and a natural networker – making everyone feel at ease and adding his own special touch of magic…..