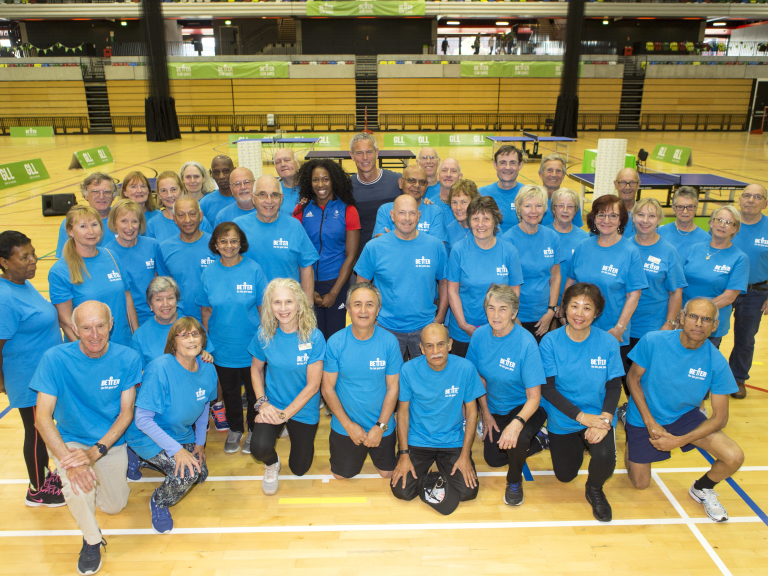 A team from Epsom & Ewell took runners-up spot for the second year in a row at the 2019 Better Club Games, representing the borough to compete against 500 over 55-year-olds at the an Olympic-style event for older people, held at the Copper Box Arena, Queen Elizabeth Olympic Park on Thursday 19th September.

The annual event was run by the UK’s largest public leisure provider Better, the consumer facing brand of charitable social enterprise GLL. Now in its 14th year, the event aims to encourage older people to become more active and to highlight the social and physical benefits that sporting activities can offer to individuals of all ages.

In a repeat of last year’s top two, Greenwich retained their 2018 title, as Epsom and Ewell took the runners-up spot, ahead of Sutton in third place.

“I am incredibly proud of the team from the Rainbow Leisure Centre in Epsom who represented Epsom & Ewell at this year’s games. Our Club Lead Alison McDowall works tirelessly to fill the spaces on the team and encourage our members to participate in sport at all levels at this iconic venue. They should all be very proud of their achievement. “ Said Darren Pope, General Manager, Rainbow Leisure Centre & Spa, Epsom

As the teams assembled at the site of the 2012 games – which included the timed swim event at the London Aquatics Centre, the competitors were joined by two Team GB Olympians, five-time Olympic swimmer, Mark Foster and sprinter-turned-bobsleigh athlete Montell Douglas.

Mark Foster said: “I think it’s an amazing event, it’s brought a lot of people together. Not only are these people getting fitter for themselves, but they’ve also got the social aspect, meeting people with a similar mindset and similar likes.

“I can see people having fun today, though it’s about the games itself, ultimately, when they’re back in their local boroughs and local centres, they all have their own social network.

“You can see that they’re enjoying what they’re doing, but they’re also a little bit fitter and if they’re moving, they feel better, look better and enjoy themselves.”

Mark Sesnan, Managing Director at GLL, said: “As GLL is the UK’s leading charitable leisure social enterprise we are proud to run the Better Club Games. This event allows us to celebrate the sporting talent amongst our older members, who regularly attend 55+ sessions at Better facilities across the country every week.

“In welcoming people to the 14th annual Better Club Games, we continue to demonstrate the benefits that regular physical activity and an active lifestyle can bring to both mental and physical health, whatever your age.”

Established in 1993, GLL is the largest UK-based charitable social enterprise delivering leisure, health and community services. Operating under the Better brand, we manage over 270 public sport and leisure centres, 113 libraries and 10 childrens centres in partnership with 50 local councils, public agencies and sporting organisations.  GLL has 850,000 members and welcomes 54 million customer visits per year.

Alongside our core leisure and library divisions, we also operate in sport and legacy development, health intervention and education - as well as running the GLL Community Foundation focussed on supporting local projects and the GLL Sport Foundation; the largest independent athlete support programme in the UK, focussed on supporting today’s and tomorrow’s athletes.

Macmillan Centre Manager Celebrates 21-years at Cancer Centre And 43 years in the NHS!@Epsom_StHelier @ macmillancancer
Sign up for offers
Sign up for what's on guide
Become an author
Popular Categories
By clicking 'ACCEPT', you agree to the storing of cookies on your device to enhance site navigation, analyse site usage, and assist in our marketing efforts.
For more information on how we use cookies, please see our Cookie Policy.