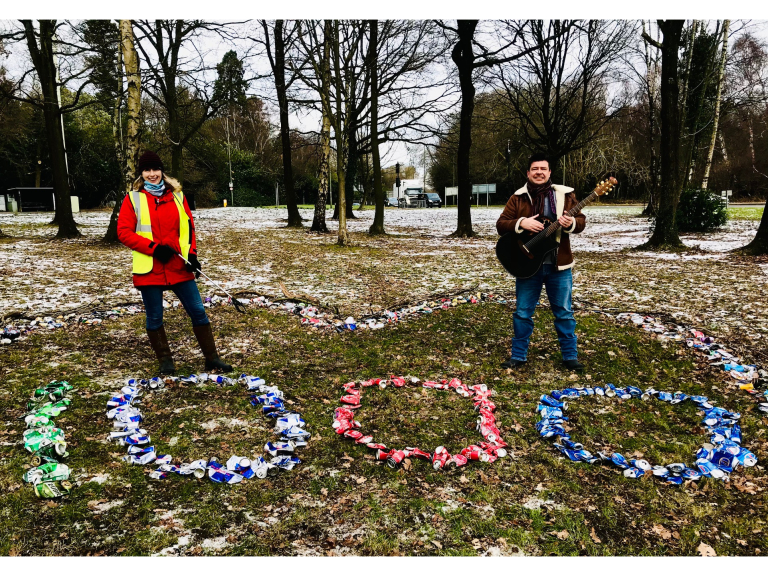 For Valentine’s Day this year, a Surrey litter picking group decided there was no better place to spread a little of love than in their own local community.

During a period of just two weeks, the dedicated band of regular volunteers from Tadworth, Kingswood, Walton & Burgh Heath Litter Pickers - @ Clean Up Tadworth set about collecting 1000 empty drinks cans, items the group rather too regularly find strewn across its neighbourhood. A plan was hatched to create a temporary giant piece of litter art in the shape of a heart and display it on Valentine's Day in the centre of Tadworth's main roundabout in Surrey, which links the 5 villages.

The project highlights the terrible and increasing problem caused by some people who refuse to bin their litter or take it home and instead choose to mindlessly discard it in public places, not just in their own locality but all over the country. The drinks cans used for the Valentine’s Day collage have now been removed and donated to Banstead’s The Beacon School Friends Association Charity in association with Tadworth Terracycle to kick start a new litter awareness and recycling project at Surrey senior school, The Beacon.  It will be launched as soon as the students return to school, and will involve all year groups.

On Sunday (14th February), Banstead’s popular singer songwriter and Beacon School parent, Michael Armstrong dropped by to pose for photos with the newly created giant heart on the roundabout. He is supporting the litter awareness initiative by way of a self-penned new single release entitled ‘Matters of Heart’, which will be released on 5th March. www.michaelarmstrongmusic.co.uk

The @CleanUpTadworth litter picking group was founded by Kingswood resident Alison Godden in August 2020 after noticing a big rise in litter during the first lockdown. Following a local social media shout out, volunteer numbers very quickly expanded. The group is a resounding success and there are now nearly 400 Facebook group members and 50 regular litter pickers who keep the 5 villages of Tadworth, Kingswood, Lower Kingswood, Walton on the Hill & Burgh Heath as litter free as they can.

At the beginning of February, the group reached the milestone of having collected 1000 large purple council volunteer litter picker sacks full of carelessly dropped litter from the 5 villages, plus all manner of fly tipped items too. Whilst the group is thrilled with their achievement, they find it disheartening that it should be such a necessary and ongoing job. Their message is to urge people to think twice about their actions in future and to take their litter home with them if they are unable to bin it.

'‘This fantastic effort by our willing volunteers shouldn’t actually be necessary. If everyone was as passionate about our area as they are, everyone else would TAKE IT HOME! Please don’t be an Anti-social Chucker”

Reigate and Banstead Councillor, Rachel Turner adds “Within 5 months these amazing Litter Pickers have collected 1,000 full bags of litter, plus an enormous amount of large rubbish items and fly tipping and have also got various communities working together. Volunteers include children who are really committed to keeping our beautiful heath, woodlands and other areas litter free.’’