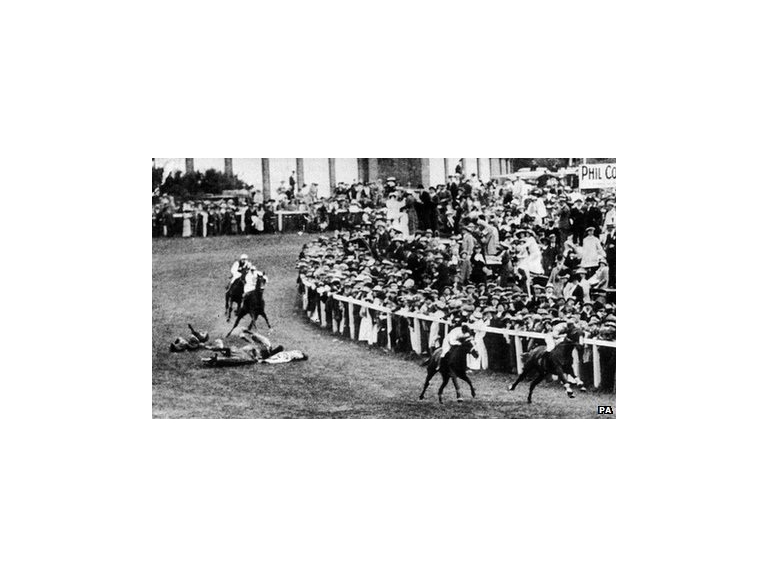 Surrey artists are being asked to submit proposals for a piece of artwork to commemorate the only suffragette killed campaigning for votes for women.

Emily Davison died from her injuries four days after running out in front of King George V's horse as it ran in the Epsom Derby on 4 June 1913.

Epsom and Ewell Borough Council wants to commission a piece of public art to be located near Epsom Downs racecourse.

The cost will be met through fundraising, sponsorship and grants.

"It is one of the most significant and tragic events in the history of the town and yet at the moment there is no significant memorial to Emily Davison," said councillor Clive Woodbridge.

"We would like to have a piece of art that commemorated not just Emily Davison but the sacrifices and achievements made by women who helped to establish opportunities in society for women.

"I hope it will be something that will capture the spirit of Emily Davison and the suffragettes.

"It is a great opportunity to create a piece of public art that is a little bit innovative and iconic that people would come to associate with Epsom."

Mr Woodbridge said the council wanted an artist from Surrey to create the work for the people of Surrey, possibly to be sited on a roundabout near Tattenham Corner, where the incident took place.

"We think this is quite an appropriate location," he added.

"It gets passed by many people every day but also it is a site that Emily would have passed on her way to the races and on the way back when she was taken from the racecourse to Epsom Cottage Hospital."

A series of events is planned in Epsom to mark the centenary of Davison's death, including an exhibition at Bourne Hall starting in May.

Other events are being planned in Morpeth, Northumberland, where Davison is buried, over the centennial weekend in June.

Article and picture from BBCNews