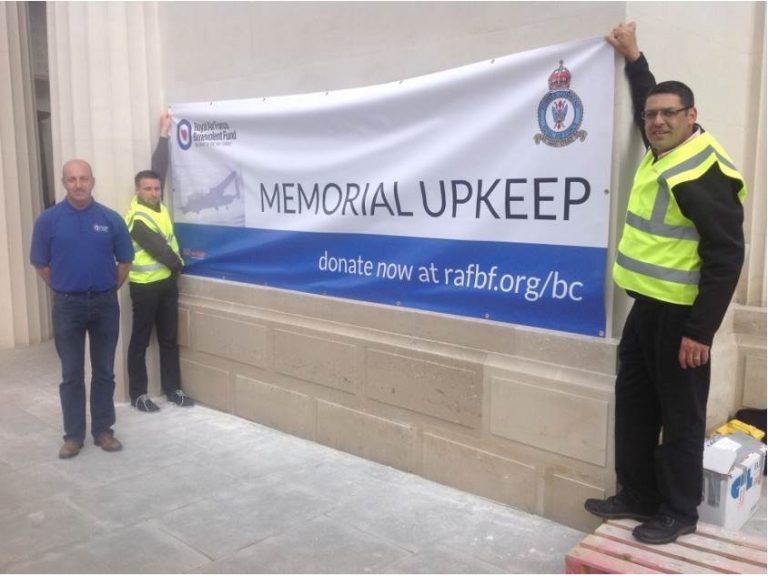 The damaged section of stone work had been covered with plastic sheeting as a temporary measure.  But LBC Radio wanted to try and provide a more permanent solution after learning from the RAF Benevolent Fund that the restoration was likely to take longer than anticipated.

Within 24 hours, SIGNARAMA Surbiton designed, produced and installed a temporary banner much to the delight of the Royal Air Force and the RAF Benevolent fund.  The banner not only covers up the graffiti but also promotes the MEMORIAL UPKEEP drive which is supported by Radio LBC and Help for Heroes.

“I would like to thank you on behalf of the Royal Air Force Benevolent Fund, Bomber Command Association and all the dependants of those brave men who didn’t make it back from their missions in the Second World War – your extremely generous support in providing a banner will not only make the Memorial appear back to its best but will also allow the Fund to continue to raise the profile of the Memorial’s maintenance appeal.  Thanks again for your amazing generosity. “

Following their work SIGNARAMA Surbiton received much praise on Radio LBC for their excellent customer service and quick turnaround.  They have also been delighted by the number of enquiries for new signage and branding they have received.

For more information on Sign-A-Rama - call Brian on