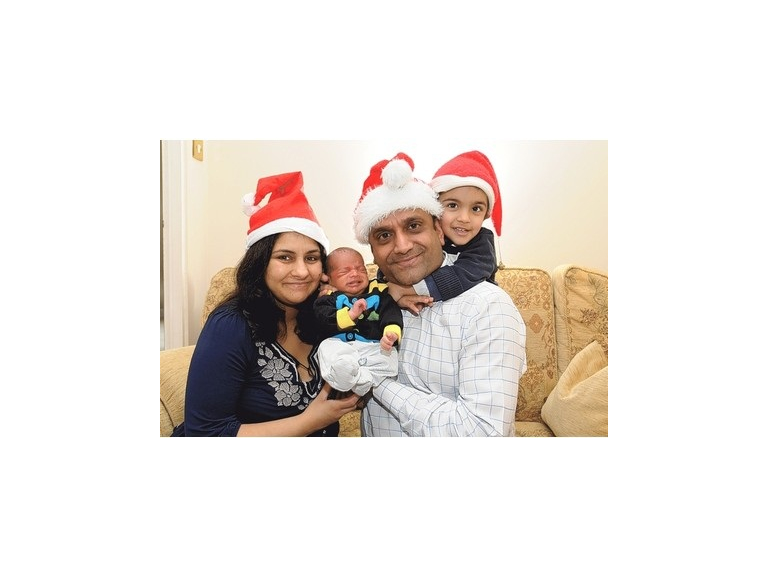 AN ECSTATIC couple got the Christmas present of their lives when their new baby son was born on Christmas Day.

Dr Anand Beri, a 39-year-old psychiatrist, and Dr Vidhu Nayyar, a consultant at Epsom General Hospital, also 39, had been expecting their second child on January 12. But baby Kush had other ideas and decided to come early at 12.22pm Christmas Day – weighing in at 2.6kg.

"My husband was over the moon when my waters broke at 2am," said Dr Nayyar. "We were both really happy, it was a special day.

"I knew something like this would happen because it was derby weekend when my first son, Krish, was born. I said I hoped it wouldn't be that weekend and then when I was told this would be around Christmas time I said it would be on Christmas Day."

The pair, who live in Tadworth and who were supposed to be hosting a family dinner on the day, phoned relatives who quickly made the trip to the hospital from Southampton to join the happy family and their new arrival, who was the second Christmas baby born at the hospital that day.

"It was amazing," added Dr Beri. "People were suggesting we call him Jesus or Santa. We were hoping to get the family down from Southampton for Christmas dinner but it all happened so quickly.

"It didn't go as expected and things had to be put back a bit. Now everyone's home and healthy. I was really excited. When she went into labour I really wanted it to happen on the 25th instead of a long labour."

Their elder son also got a double Christmas celebration. Having received his presents on Christmas Day he also got to open his mother's gifts when she came home from the hospital.

Article from Michael Davies picture by Kevin Shaw at thisissurreytoday