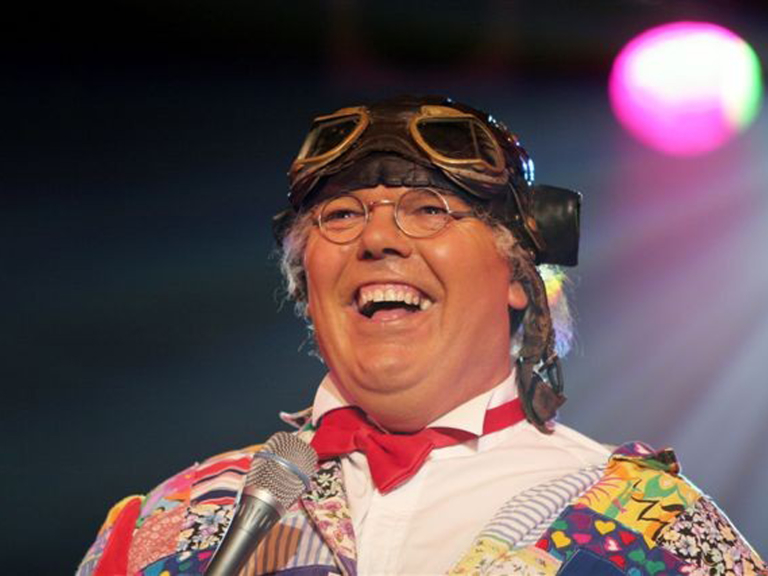 Ever wondered about the character behind the performer? Here is an insight into the popular comic Roy Chubby Brown - often controversial - always outrageous!

Roy will be performing at Epsom Playhouse on Friday 22nd January

For more details or to book your ticket visit

"I'm not political, I'm not racist, I'm not homophobic. I'm what I call a council house comic — I just like daft jokes."

What can we expect from this live show?

Anything that’s in the papers, current affairs at the moment plus all the usual standard stuff I do. If you can’t make a joke out of all the doom and gloom around you nowadays, then you’d just cry wouldn’t you!

Do you ever get nervous when performing?

No, not at all, I’ve been doing this too long to get nervous.

What keeps you touring?

I love to tour it’s a great buzz. There is no better feeling than having a room full of different people laughing every night, I love it!

Why do you think the north of England has constantly produced so many talented comedians?

We have to be funny - we’ve ****-all else to work at. Real people, real lives are comedy in the North.

How did you first get into comedy?

By accident really, I was a drummer with a group when I was young. In the middle of a gig, the power went, so to pass the time while it got sorted, I started shouting jokes out at the audience and they laughed. After the gig, the guys in the band said we should add it in the show. I got cocky then and started to put more and more jokes in and less music, it just grew from there. Around that time, I went to prison (when I was young and stupid) and read a book called ‘I owe Russia $1200’ by Bob Hope and that’s what really made up my mind to go for it full time.

What are some of the jobs you had before becoming a comedian? Which did you enjoy and which did you detest?

Hated the f***ing lot! Except playing drums for a band.

Where did the costume idea come from?

In 1969 I’d be booked for lots of stag do’s and the men had a tendency to spit and throw beer over me.  So my first actual suit for shows was made from beer towels that you find on a bar top. I really liked it! I liked the bright colours and the patchwork. I then thought, wouldn’t it be a great idea to have a whole suit patchwork, so that’s where it came from. I have them made especially, I’ve got 6.

If you weren’t a comedian, what job do you think you may have done?

I always wanted to be an artist, I would have loved to be a cartoonist, maybe for a local paper.

When you’re not working what do you like to do in your spare time?

I love playing the piano, I could sit and write songs at my piano all day. I recently wrote a song for a charity, Zoe’s Place a baby Hospice, it’s one of the charities that is really close to my heart.

There must be so many, but if you had to pick a particular highlight from your career, what would it be and why?

If I had to, it would be when I performed two nights at the London Palladium in 1984. We were sold out on both nights. I loved it.

In 2002 you were diagnosed with throat cancer and had various health scares through the years, most recently a gallstone operation that ended with the removal of your gallbladder. How are you now?

I thought it would only be half-hour operation. They were just supposed to take the gall stones out, but they were so gangrenous the operation took three-and-a-half hours and they had to take out me gallbladder too. The pain was excruciating. I was drinking pure morphine. I wanted to die. The little things you take for granted became a hindrance. I lost the use of my hands and feet for a while, I couldn't sleep. After the operation, I asked the sister when I'd see the doctor, and she said 'Not for a few days, that's when they check-up'. But she turned around, and there he was. He said, 'Mr Vasey, I do thousands of these a year, and we always get one awkward *******!'".

When I came out, I thanked them for saving my life and I've sent a bunch of flowers to the hospital every day since leaving.

Now I’m feeling back on form and 100% fit, things like that just make me appreciate what I’ve got and how lucky I’ve been through it all. Every time I’ve been ill, getting back to work has been the thing that motivates me to get better. If I sit around too long, I get fed up. I need to be working constantly.

How does your early life affect your comedy? Can you draw on experiences; people you have met etc?

Absolutely my early life influenced my comedy greatly. When you are brought up on a tough housing estate in a working class area you see the funny side of life every day, you have to! You need a sense of humour to cope with the difficulties which is why you have a lot of successful comics from working class backgrounds.

You have seen lots of changes in comedy during your time in the spotlight, what do you think of the state of comedy today?

It’s very healthy. Live shows are attracting huge audiences with Peter Kay, Michael McIntyre, Lee Evans etc selling out arenas its brilliant. You can’t beat coming out with your mates, watching a show and having a laugh, comedy is a great tonic!

Are there any comedians who make you laugh?

Too many to mention! I like funnymen like Doddy, Tommy Cooper, Lee Evans, Frank Carson, Max Miller, Micky Miller, Lee Mac, comics who have a first class delivery. I have so many that make me laugh for different reasons; I love listening to new and old comedy, I’m always listening and watching comedy. We have an abundance of funny men and women in this country. We are very lucky to have the freedom to say what we want, even if everyone doesn’t agree.

Do you have any ambitions left to fulfill, both personally and professionally?

I’d like Cheryl Cole to sit on my face or to find something that cures cancer.

How did you feel when The League of Gentlemen named their local town after you? What are your memories of working on the show?

Absolutely over the moon, I was made up! I loved being on the show, they had a great team and all of them were up for a laugh.

If someone has been to see you before, can they expect something different from this performance?

Yes, I write new material every day. The show is constantly changing to keep up with what’s going on in the world. I create a brand new show for every year’s tour. I spend my days reading / watching / listening out for new material and my evenings telling people about it.

How would you describe your show to someone who has never been?

Controversial but in a funny way I say the things people think but never say. That’s why we say if easily offended please stay away!

What type of people do you think attend your shows?

All types of people, all ages in fact anyone with a sense of humour. My fans have been with me for 46 years. The young ones always say, “My Dad loves you” or “My Mam thinks you’re great” and I love that. I think I’ve got over 300,000 fans on Facebook and around 11k on Twitter and they all talk to each other on there, its crazy! I try my best to keep up with them but being old and having fat fingers makes it hard! Haha.

Your act is considered too offensive for TV. Does that give you more freedom?

Yes, I can do what I want now and no one tells me off! Haha no, really... TV didn’t change with the times as quick as I did! If TV’s watershed is 9pm…. mine is 7pm! Haha I’m just too much for TV nowadays…they wouldn’t know how to handle me.

In a world of political correctness how do you stay the right side of the line, or would you say that you don't? Why do you think your style of comedy is still popular?

I'm not political, I'm not racist, I'm not homophobic. I'm what I call a council house comic — I just like daft jokes. If I wanted to do politics, I would have gone to the House of Commons.

I’m classed as ‘controversial’, controversial comedy is featured every night of the week these days on TV depending who you are and what you watch. I watch the news like everyone else but I just have the balls to say out loud what everyone is thinking, that’s the only difference.

Do you really feel nothing is sacred when it comes to comedy, nothing’s off limits?

Not necessarily so, I think it’s up to the individual to edit themselves. There are quite a few things a don’t like people telling jokes about at all. I’m not comfortable with telling jokes about sick or disabled children etc. because they can’t defend themselves, it’s not fair. I do a lot of charity work off stage and I think that if you have the chance, you should always help others.

Has anyone walked out of a gig?

No but I’ve thrown a lot out! I might be a bit long in the tooth now and grumpy but after 46 years all I ask is for at my gigs is a little respect while I’m trying to do my job and sometimes, like all of us, the beer gets the better of a few people and they get a bit loud which spoils it for other people.

Where’s your favourite holiday destination and why?

Tenerife, because we know where everything is!

What is your favourite (clean if possible!) joke?

Who was your hero growing up?

Do you have any Superstitions, routines that you do before or after a show?

No… does going for a curry after the show count?

As a man who looks like he enjoys his food, what would be your last three course meal on earth?

That’s a tricky one…Fish chips mushy peas for starter, Sausage egg & Chips for my mains and a plate full of custard slices for desert!

If you could meet anyone in the world dead or alive who would it be and what would say to them?

John Lennon, I would tell him he was a f***ing genius.

How many tattoos do you have?

What’s your most annoying habit?

Would you ever do one of the celebrity programs Strictly / Big Brother / I’m a Celebrity / Master chef.

No, I’m too busy touring, I haven’t got time.

If you were stranded on a desert island, what three items would you take with you?

Custard slices, all of Ken Dodd’s comedy tapes and a Piano.

The fat bloke in the north east, who hopefully won the lottery and gave it away.

Want a WOW Factor in your outdoor space - #PergolaBlinds could do just that. Ask Signature Blinds & Shutters #SurreyBlinds #EpsomBlinds #SuttonBlinds @Signature_bsa
Sign up for offers
Sign up for what's on guide
Become an author
Popular Categories