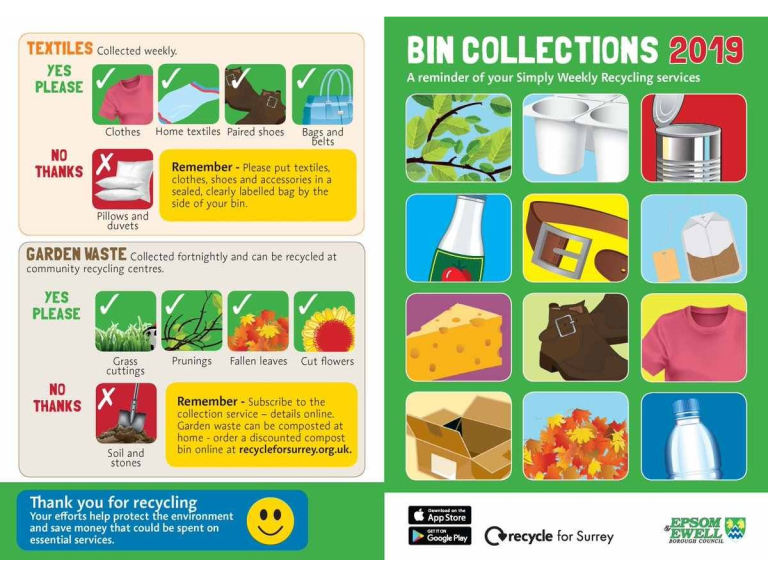 Simply Weekly Recycling was launched in summer 2017. In the twelve months following the launch, we recycled a whopping 1,300 more tonnes of dry recycling (items that go in the green recycling bin and glass box) than we did in the previous twelve months.

Some of the survey's headline findings include:

Cllr Peter O'Donovan, Chairman of the Council's Environment and Safe Communities Committee said, "Following on from what you told us in the simply weekly recycling survey and in an effort to ensure everyone in Epsom and Ewell knows what to put in which bin, we’ve produced a new recycling guide which will be delivered to all households this month - look out for it!

"In particular, the new guide gives you more details on what types of plastic you should and shouldn't recycle in your green bin. This year it has become harder and more expensive to recycle plastics, especially after China stopped accepting plastics for recycling earlier this year. To help us keep costs down, we need your help in sorting out what plastics should go in your recycling bin, and what shouldn't.

"And thank you for recycling. Your efforts really do make a difference."

All information on Simply Weekly Recycling including the new guide and full survey results are all available at www.epsom-ewell.gov.uk/recycling

Overall, respondents are satisfied with the service and have raised some development points for consideration to help improve the service further.

The full results of the Simply Weekly Recycling survey are available at: https://www.epsom-ewell.gov.uk/residents/recycling-and-waste/simply-weekly-recycling-survey-results