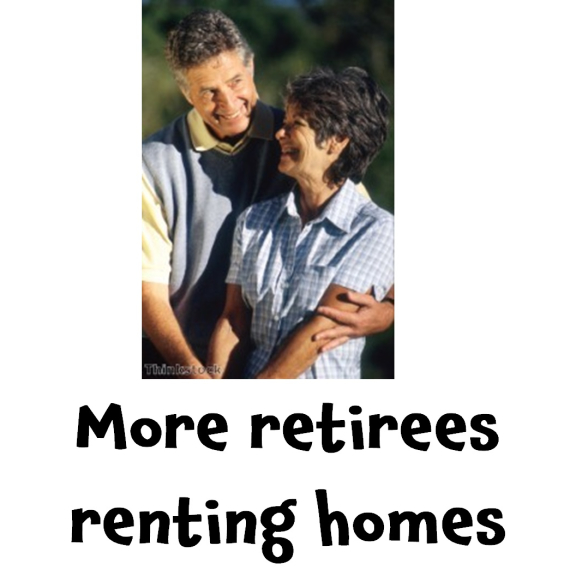 Why retirees are becoming increasingly important to the    rental sector...

The private rented sector (PRS) is changing. As the number of people living in rental accommodation expands, letting agents are catering to a much wider range of tenants than they have in the past.

While traditional staples of the PRS like students and young professionals remain important, young families with children and older people in retirement are turning towards the rental market. The latter group is becoming increasingly prominent in the sector - something letting agents may well be able to take advantage of.

Several reports have revealed there is a growing number of retirees living in PRS accommodation. The most recent of these was from the Prudential, which showed 26 per cent of retired people rent their home, with the trend most common in the UK's large cities. Meanwhile, HomeLet said in October it had noticed a growing number of older people moving into the PRS.

But why are retirees choosing to rent ' Another report by the Prudential claimed there are several factors, although all of these are related to finances. In a survey of retired renters, the organisation found 40 per cent had sold their house and started renting to pay off debts. A further 19 per cent had done so due to the cost of a divorce and separation, while nine per cent simply wanted to boost their income.

Commenting at the time, Prudential retirement expert Stan Russell stated: "Renting in retirement can make financial sense and accessing property wealth to boost retirement income is a genuine solution for many. Our research shows that many retired renters are perfectly happy with this arrangement."

It is clear more retirees are turning to the PRS and this is something letting agents need to be aware of. What older people look for in a rental property will naturally be quite different to younger generations and agencies should know about these distinctions and tailor their services accordingly.

The impact of retirees in the PRS is not restricted to tenants, as the demographic is also prevalent among landlords. Recent research from Secure Property Investment revealed a significant number of over 50s are investing in rental property as they see it as the best way to ensure their family's financial security.

Graham Davidson, the company's managing director, said he believes older people are attracted to the PRS as an investment opportunity after feeling let down by the banks and the stock market following the financial crisis. Meanwhile, a study by BDRC Continental in early 2013 found 81 per cent of landlords see their properties as a means of supporting them financially when retired.

Mark Long, the company's director, said: "Landlords consistently tell us that they see their property portfolio as forming a critical part of their pension provision for the future."

The letting sector may benefit from targeting these older landlords, as there is a good chance retired people will be unwilling to take care of the day-to-day running of their portfolios and will turn to an agent instead.