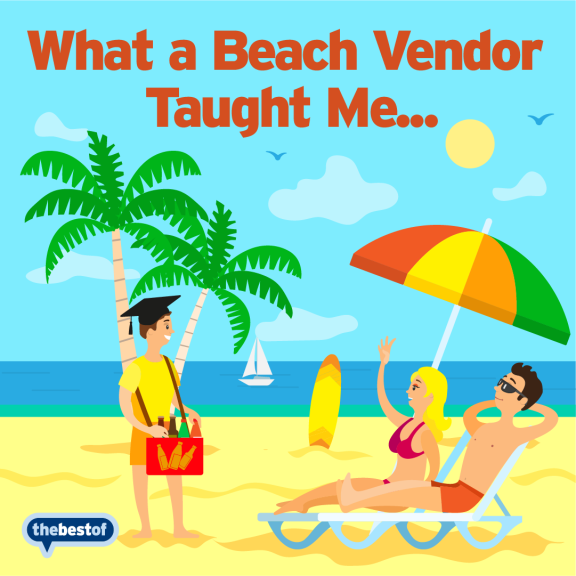 🏖️If you’re lucky enough to have a decent beach holiday, chances are you will encounter a group of individuals who make their living walking along the beach selling items to willing sun worshippers. Cheap sunglasses and straw hats aside, the ones that offer items that do attract our attention got me thinking. 🤔

The ones that trigger the thought, (even if it’s a tiny thought), of “That’d be nice”.

🥥 🍍 🍉Items like coconuts, pineapples, watermelons etc. Freshly cut and prepared right in front of you in a matter of seconds to give you a refreshing and tasty snack on a hot day.

They walk up the beach and back again, not once but several times a day offering their produce. It’s all very good natured and there’s nothing pressured about it. But what I love is that these guys and girls ask EVERY TIME they walk past. Some would say it’s quite primitive marketing. Others would say it’s quite sophisticated selling. 🧐

👪And it’s a little reminder really, because when we were kids, we were very good at getting stuff. We just kept asking our parents until we got it.

But when we get into business, too many forget this and we put a message out there to people and if they don’t bite once, most business owners don’t try again. Bonkers!

The beach vendors know that just because someone didn’t buy a pineapple yesterday doesn’t mean they won’t buy one today. They know that “No” yesterday, just meant “Not now”, so they keep coming and keep asking.

❗❗Now, don’t take this as permission to bombard people and send out emails and messages all the time. What we are saying is that, however often you are asking for business or promoting things at the moment, doing it a bit more will grow your revenue and your profits.

So why not send a little email TODAY to people that have enquired in the last 2 or 3 months, just asking if they’re still interested in whatever it is that you do? You never know 😉