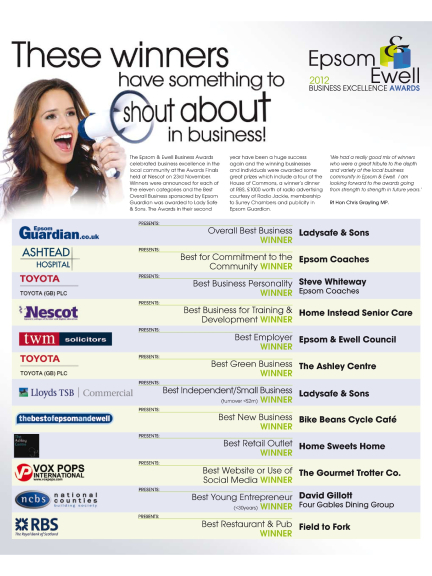 Out of the many dozens of individuals and companies that had been nominated for awards, nine received coveted trophies at the award ceremony at Nescot. Two companies, Epsom Coaches and Ladysafe and Sons, won a pair of awards each.

It was the second year the awards have been held and an extraordinary range of businesses were winners, from a bike cafe and a care home, to the Ashley Centre and Epsom Council.

Opening the awards ceremony, local MP Chris Grayling, recently promoted to Secretary of State for Justice, thanked all the sponsors who had supported the awards and congratulated the winners and all the nominees.

He said he hoped the awards would give their businesses a welcome boost in this difficult economic climate.

Mr Grayling said: "There were a very large number of entries this year, it's been very competitive and all of our winners and nominees tonight have everything to be proud of. The reason for doing this is not just to celebrate local businesses, it's also to give businesses a leg-up during what it still a very tough time."

The accolade of overall best business went to Ladysafe and Sons, which provides a reassuringly reliable minicab services to women. Pauline Banyard, who set up the company eight years ago funded initially by her credit card, said: "I'm elated. I can't tell you how excited we are. I'm very pleased for the drivers that work for us - they will all be excited and hopefully we can build on this."

Steve Whiteway, managing director of Epsom Coaches, who picked up awards for commitment to community and business personality, said: "I feel elated. It's great that I've been recognised for my contribution as a business personality but also for my contribution to the local community through Epsom Coaches. We offer value for money, good quality and actually put something back - both in cash and in kind.”

David Beddows, general manager of The Ashley Centre, which won the green award, said: "It's wonderful and it's such a team effort to bring it together. The guys have worked really hard over the course of this year and it's not just The Ashley Centre team but all the retailers as well. I'm just proud of the whole centre and that it has achieved this."

Frances Rutter, chief executive of Epsom Council which won the best employer category, said: "I'm absolutely delighted, it will mean so much to the staff back at the town hall."

Sean Duggan, editor of the Epsom Guardian, which sponsored the awards and helped judge several of the categories said:" There were some really outstanding entries, and I would like to congratulate all the winners who have shown exceptional business acumen, initiative and commitment.

"In the restaurant category we decided to let the public be the judge this year. Over 600 votes were cast on epsomguardian.co.uk to decide which of three shortlisted restaurants, Chalk Lane Hotel, The Canopy and Field to Fork, would be named the borough's best in 2012. In the end Field to Fork did exceptionally well and won with 341 votes."

Mr Grayling said the range of winners reflected the depth and variety of the local business community and said he looked forward to the awards building on their success in future.