This short bulletin will be my final one before the election, but there are a few things that I wanted to update you on.

Firstly, thank you to everyone who has filled in my online survey about the future of housing development in Epsom and Ewell Borough. If you have not had a chance to read my proposal to the Borough Council about how to meet its housing challenge, you can find details on my website, www.chrisgrayling.net.

As you will probably be aware, there are a series of very controversial developments in the pipeline locally involving the potential construction of tower blocks and other tall buildings. There are four particularly problematic proposals, one in Stoneleigh and three in Epsom. Of these, the tallest being discussed is at the Epsom Hospital site, where Legal & General are supporting the construction of a new care village next to the hospital on the land that was sold by the hospital trust earlier this year.

The principle of the scheme is logical – it involves building sheltered homes and care suites for the frail elderly, with care support on site for the residents, and working alongside the hospital. But the scale of it has to be right for the surrounding area, and I think a tower block would be totally unacceptable. I have now met the developers who have agreed to look again at their design. I have said that it would not be acceptable to build anything that is higher than the hospital itself. There is still speculation locally that the site was sold on the cheap, but I have looked into this and it does not appear to be the case. There was a higher bid, but that was contingent on getting planning consent for a series of tower blocks, and the money would only have been paid if the Trust had carried the planning risk itself. I am very glad that the local Trust management did not take this bid seriously.

I do not have a direct remit over planning decisions, but I will continue to do my best to ensure that what comes forward for these four sites is appropriate for the surrounding area. We do need more housing locally to help the next generation onto the housing ladder, and also because there is an acute shortage of affordable homes – I hear from too many people stranded in temporary accommodation away from the Borough. But any new development has to protect the overall character of the area.

There is no news as yet of the final dates for the publication of the draft Mole Valley local plan. But I am expecting proposals to build around 1,000 new houses on green belt land around Ashtead. I think this is not the right strategy, and will argue instead that it is better to add a number of houses to each village in Mole Valley. There are very few smaller communities which would not benefit from a small local increase in housing, which will help provide much-needed business for local shops, pubs and post offices.

Finally, can I give you advance notice for your diaries of a Christmas charity concert to be held at St Barnabas Church in Temple Road, Epsom at 7pm on Tuesday 3rd December. The Metropolitan Police Choir will be singing a mix of music, but with a number of Christmas songs to mark the season. The event is in aid of the local mental health charity, Love Me Love My Mind. Admission is free, but we will be asking those attending to make a contribution to the charity. Please do try to come. Mental health is one of our big challenges in the local community and the work done by Sue Bull and her team, particularly in Epsom Mental Health Week, is really good. Do put it in your diary now. I will hope to see you there. To book tickets please follow the link here 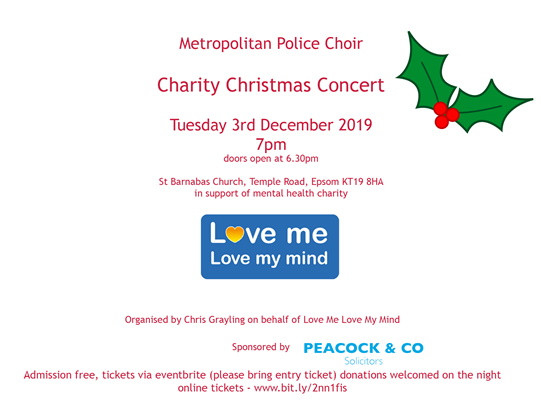 OUR MARKETING AGENCY IS GROWING! And we have a VACANCY

Meet Lucy & Theo looking for a home - #Epsom & Ewell Cats Protection @Epsom_CP #giveacatahome
Sign up for offers
Sign up for what's on guide
Become an author
Popular Categories
By clicking 'ACCEPT', you agree to the storing of cookies on your device to enhance site navigation, analyse site usage, and assist in our marketing efforts.
For more information on how we use cookies, please see our Cookie Policy.