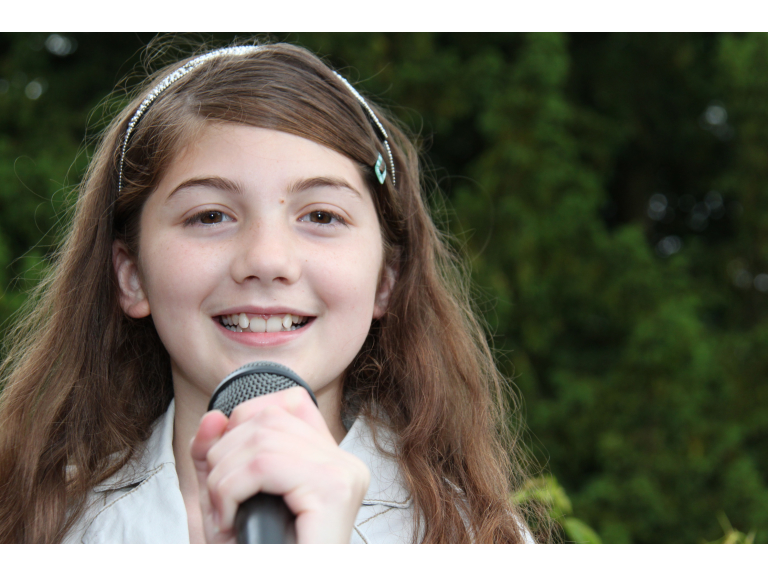 An eleven-year-old schoolgirl from Kingswood made her singing debut on radio this week (Wednesday 25th July) to help raise awareness of a children’s charity and her challenge to achieve a final target of raising £1,000 for The Children’s Trust, Tadworth.

Elena Bayk-Mohammadi was invited to sing live at BBC Surrey Radio studios in Guildford, where she was also interviewed by Joe Talbot on the his ‘Tea for Two’ programme.  Singing her favourite song live to a backing track, the talented youngster gave radio listeners an amazing performance of the famous song, ‘Hallelujah.’

Elena, who simply loves singing, came up with the idea of singing to raise money for the Trust,  where she is a regular helper at fundraising events with her mother, Sharon who is also a volunteer at the Trust’s school.  For the first time in front of an audience of over 900 visitors, the eleven-year-old sang live at the charity’s annual Fun Day held at the beginning of July.  Elena, who is thrilled to have gained a scholarship at Boxhill Independent School in September, said: “I really wanted to raise some money for such an amazing charity and felt that singing was a great thing to do as I enjoy it a lot.    I would like to thank everyone who sponsored me, including my friends and family.   And finally, a big thanks to The Children’s Trust for being such a great charity.”

“We are very proud of Elena and her fundraising achievement.  She has already received £966.00 through sponsorship, which is a fantastic result.  Her singing performance at Fun Day was incredible, especially in front of such a large audience.  We are already looking forward to Elena singing again at our Christmas Fair in November.”

If you would like to help Elena reach her £1,000 target, visit: www.justgiving.com/elenasings