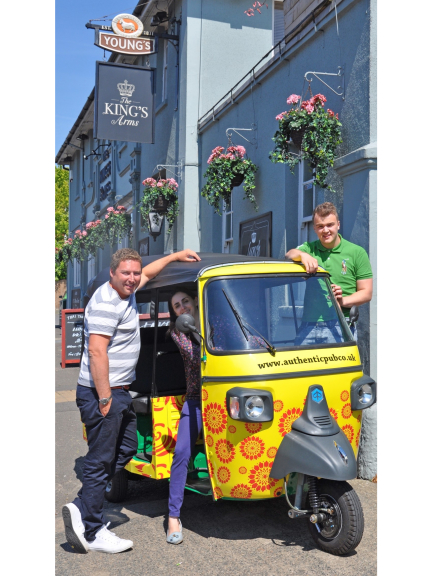 A popular Epsom pub is being rebranded as the King & Dragon to reflect its new authentic Thai food menu. The Kings Arms in East Street will feature the new branding following the decision by owner Authentic Pub Co to introduce the Dragon eat-in and takeaway food offer.

The Dragon combination of a traditional pub with a Thai menu operated at a number of pubs in Surrey, but when the group which owned the format was sold last year, it was threatened with extinction. This prompted fans to launch a social media campaign to save it.

Having stepped in to take over two Dragon pubs, along with the staff, in Norbiton and Worplesdon, Authentic Pub Co has decided to also transplant the offer to the renamed King & Dragon. A branded Authentic Pub Co tuk-tuk driving between the pubs will help promote the offer.

Director Simon Bailey said, “The Dragon format was very popular in the Epsom and Ewell area at its two former sites, and so we’re delighted to providing a new home for these authentic, freshly cooked Thai dishes at the King & Dragon.

“We’ve built a loyal following since we took over the pub last summer, and the combination of the change of name and new menu gives the King & Dragon a distinctive offer and increases the choice of places to eat out in the area.”

Experienced Thai chef Winai Thepmalai, previously at another Dragon pub, is leading the kitchen team at the King & Dragon, while new general manager Gareth Chalmers is in charge of the front of house welcome.

For customers looking for traditional pub food, the menu also features a range of freshly cooked classics available including the Authentic Burger along with steaks, fish & chips, bangers & mash and, of course, a great Sunday Roast.

On the drinks side, the offer has been enhanced with an expanded range of craft beers and world lagers, a new wine list and a range of speciality coffees. For the summer, there are also plans to serve freshly cooked gourmet hot dogs and burgers from an outdoor grill in the pub’s large garden.

Bailey added, “The King & Dragon is a wonderful pub, and we’re looking forward to welcoming residents and local business to enjoy our revamped food and drink menus just as  - fingers crossed – the spring weather kicks in.”

Authentic Pub Co is a family-owned business, founded by Simon Bailey and wife Sarah. As well as the King & Dragon, its pubs include the Norbiton & Dragon, Norbiton; the White Lyon & Dragon, Worplesdon; the Waggon & Horses, Surbiton; the Bell Inn, Hampton, and The Flower Pot, Lower Sunbury.

Epsom wins Silver! #EpsomInBloom2021 @EpsomEwellBC @Go-Epsom
Sign up for offers
Sign up for what's on guide
Become an author
Popular Categories
By clicking 'ACCEPT', you agree to the storing of cookies on your device to enhance site navigation, analyse site usage, and assist in our marketing efforts.
For more information on how we use cookies, please see our Cookie Policy.