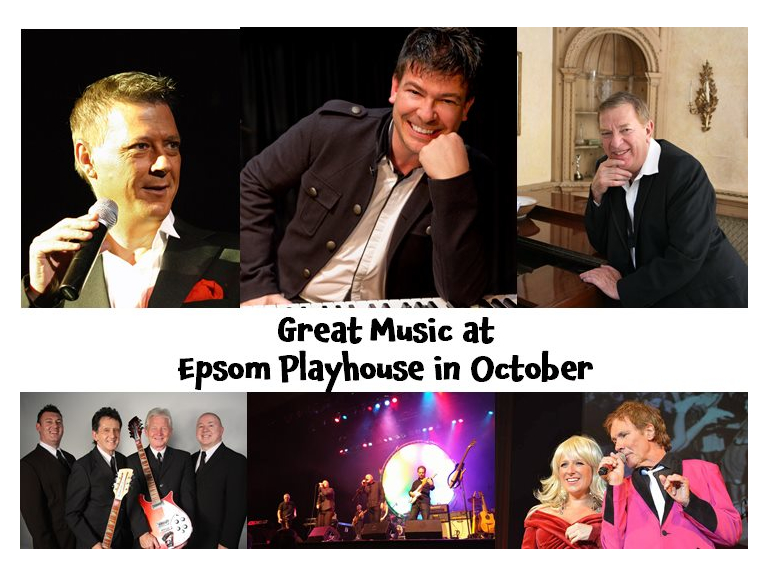 October sees the Epsom Playhouse hosting some great music shows from Singalonga Frozen to Fifties, Sixties and Seventies celebration That’ll Be The Day and a lot in between.

On Saturday 3 October there will be a screening of Disney's hit film Frozen with lyrics on screen to sing along. Introduced by a live host who will show how to use the free prop bag, warm up singing voices and teach some dance moves with the help of a couple of Singalonga Princesses. Children are invited to come dressed up as their favourite character where the audience are the stars. Age recommendation 5+.

On Sunday 4 October with such classic hits as, Sweets For My Sweet, Needles and Pins, Don’t Throw Your Love Away, Sugar and Spice and When You Walk In The Room, The Searchers remarkable career continues. Starring John McNally, Frank Allen Spencer and James Scott Ottaway the show is filled with with anecdotes and reminiscences, as well as performances of all their famous hits, plus many album recordings, B-sides and a selection of other favourites.

Back by public demand on Friday 9 October The Wall of Floyd is a nine piece Pink Floyd tribute band formed by musicians who love and play the music to the standard expected from the actual band themselves. The show includes tracks from albums including of course Dark Side Of The Moon when the fantastic sound will be recreated live by these first class musicians.

Award winning singer Robert Habermann returns to the Epsom Playhouse for a matinee show on Wednesday 14 October in the Myers Studio telling the story and singing Bing Crosby's greatest film songs from his 50 movies. Starting out with the early Mack Sennett shorts the show will also feature hit songs from films including the much loved Road series, the perennial White Christmas and High Society ending with a medley of Crosby's number one hits.

Back by popular demand and fresh from his national UK tour with the legendary Leo Sayer, Epsom favourite Michael Arrmstrong will be on in the Myers Studio on Saturday 17 October. It's been a long time coming but the wait is over..........Michael has just released his first album of original songs, featuring the musical talents of artists such as Albert Lee, Elliot Randall and Phil Palmer. Join Michael as he sings songs from his new album alongside many of his favourite standards.

On Sunday 25 October Matt Monro Jr will celebrate the life and music of his father the legendary Matt Monro. This is an unforgettable show promising a unique evening of music, warmth and love, keeping the memory of his father and his music alive. From Born Free to Walk Away and Portrait Of My Love be transported back in time by this tribute to one of Britain's most popular and endearing singers named "The Singer's Singer" by his peers. The show is enhanced by audio visual and narration.

Prepare for a nostalgia party extravaganza as the legendary That'll Be The Day returns to the Epsom Playhouse on Tuesday 27 October The nation's favourite rock ‘n' roll variety show has been touring for 30 years and the birthday party is coming featuring a fantastic new line up of knock-out hits from the Fifties, Sixties and Seventies plus more side-splitting comedy! Early booking is advised as this ever-popular show always attracts a big audience of music lovers ready to party.

History that’s Fun and Entertaining with @BourneHallEwell #MuseumKidsClub – 2022 Calendar
Sign up for offers
Sign up for what's on guide
Become an author
Popular Categories
By clicking 'ACCEPT', you agree to the storing of cookies on your device to enhance site navigation, analyse site usage, and assist in our marketing efforts.
For more information on how we use cookies, please see our Cookie Policy.