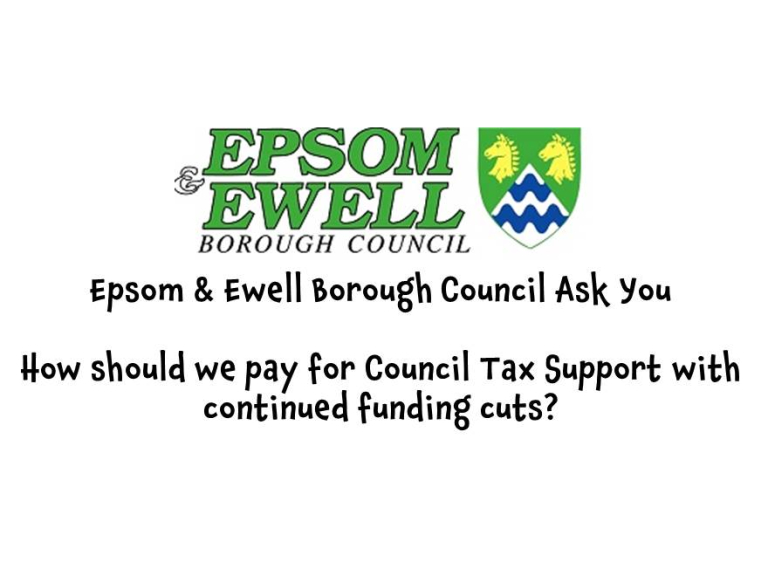 We need your views!

Epsom & Ewell residents are being asked to give their views on proposed changes to the Council Tax Support scheme from April 2016 due to continuing cuts in Central Government funding. Have your Say! Complete the survey online today at www.epsom-ewell.gov.uk

The proposed change for the Council Tax Support scheme from April 2016 is to increase the 'minimum payment' that working age Support recipients pay towards their Council Tax to 25% or 30%. The amount they currently pay is 20%.

Other options that have been considered but not viable in the long term include - increasing Council Tax, using the Council's reserve or cutting Council service/s and using the savings generated to pay for Council Tax Support. For detailed background information for each of these options please visit

As part of the Government's Welfare Reforms, in April 2013, the national Council Tax Benefit scheme was abolished and local councils were tasked with creating their own local schemes to help those residents on low incomes. At the same time, the Government reduced funding for such schemes by 10% and further cuts to funding have continued at about 12% each year and the number claiming Council Tax Support continues to rise.

Councillor Neil Dallen, Chairman of the Council's Strategy Resources Committee, said: "Our current Council Tax Support scheme reduces the support we give some residents in order to compensate for some of the funding cuts from central government. The continued reductions to funding mean that difficult decisions have to be made; the Council needs to be able to support those households who need help to pay their Council Tax however we also want to be fair to the households who are paying the full Council Tax.

“This survey gives all residents an opportunity to give us their views on this change. These views will help Councillors make an informed decision about the best possible scheme for Epsom & Ewell residents.”

The Council had also created a Discretionary Hardship Fund to help vulnerable residents, from which funds can be awarded as a one-off emergency top-up for those on Support and in real need. Awards are considered on an individual basis. This Hardship Fund could be continued for the new scheme. Another option would be to set a lesser percentage for vulnerable residents to pay than for non-vulnerable working age Support recipients. However, this would mean higher awards of Council Tax Support and less saving towards the funding cuts Central Government has imposed.

Please note, the Council Tax Support scheme for pensioners is set nationally by central government and pensioners should see no change to the way their Support is worked out. This survey is only about the assistance received by working age residents. A resident is considered working age if they have not reached the qualifying age for state pension credit.

To take part in the consultation, visit www.epsom-ewell.gov.uk where residents can complete the Council Tax Support scheme survey online. Paper copies of the survey are available at the Town Hall, the Ebbisham Centre, Bourne Hall, the Longmead and Wells Centres. To request a paper version of the survey please call 01372 732000 or email contactus@epsom-ewell.gov.uk

Once the consultation period is over, all feedback received will be analysed and used to inform Councillors when they make their decisions to finalise the Council Tax Support Scheme for Epsom & Ewell.

Councillors will have to decide on the new scheme at a Full Council meeting in December.

Any change to the scheme would be effective from 1 April 2016.

The Council Tax Support scheme is there to help those struggling to pay their Council Tax. It is paid to pensioners (who will not be affected by this change), those out of work, and those in work on low incomes.