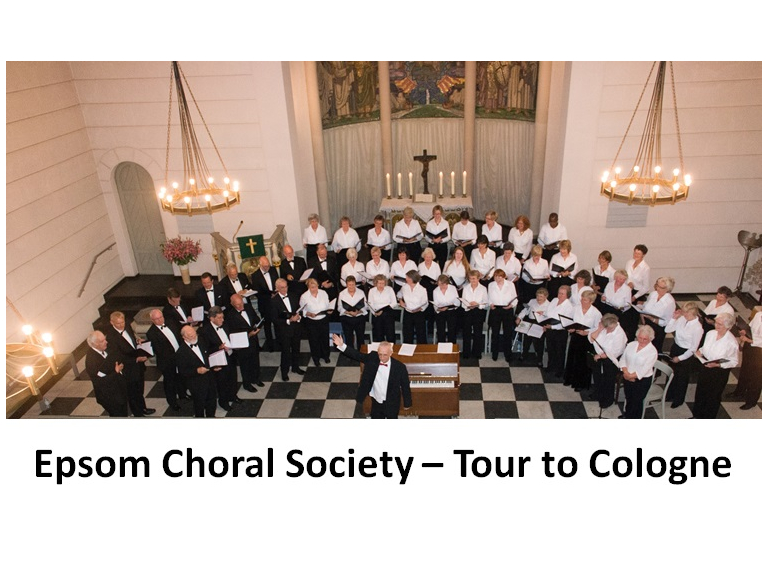 It was in 1996 when Epsom Choral Society members first included a long summer week-end tour at the end of their season's frenetic schedule of concerts. Then, appropriately enough, the choir went to Chantilly, very shortly after the two towns established their twinning link.

Many of its destinations since then, different every year, have been to France and the low countries but have also included some as far flung as Klagenfurt in Austria. Lucca in Italy and Barcelona in Spain.

On Thursday 11th July this year the choir went to Germany for the first time. One of the aims of the choir's tour planners is to sing in the cathedral of the city to be visited. The destination was Cologne whose magnificent catholic cathedral with its tall twin spires is one of the largest in Europe.

The choir stayed in Cologne's Ibis Hotel virtually within the cathedral's precincts. Its first task was to provide the music for morning prayers in the cathedral next day. This in Europe's most-visited church was attended by a huge congregation. Later the choir gave a concert in the Friedenskirche, one of Cologne's many churches. The programme was similar to the choir's summer concert in Epsom a few weeks before but with greater emphasis on English and German composers.  ‘I hid my love’ by Epsom composer (and choir member) Adrian Payne charmed the German audience as much as it had when premiered in Epsom.

Saturday was free of choral duties enabling members to wander through Cologne's galleries and museums, to be guided round the Cathedral and to spend time afloat on the Rhine. The choir met up in the evening in a bierkeller for dinner, a second opportunity to experience this form of Germany's social life. Many went down to the river afterwards to join thousands of others to celebrate Cologne's Festival of Light in the form of a spectacular fireworks display. On Sunday the choir sang at Mass in St Aposteln, another church near the Cathedral. Strains of the Lassus Mass setting ‘Je Prens en gres’, were still ringing well into the journey home later that day.