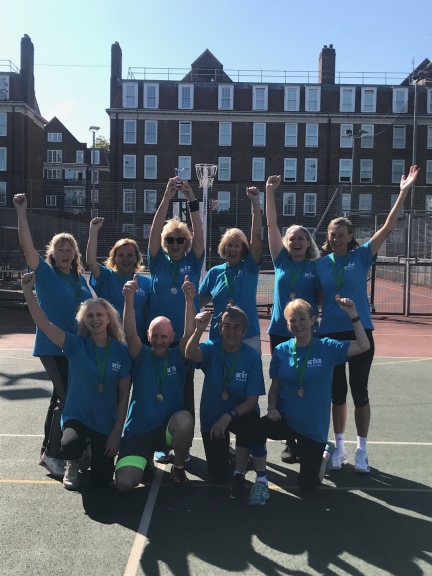 A Walking Netball team representing Epsom & Ewell at the annual Better Club Games beat off stiff competition from 6 other teams in a round robin tournament to claim first place on Friday 13th September 2019.

The team, who are members and train at the Rainbow Leisure Centre & Spa in Epsom, have been training weekly for over a year and were well prepared to take on other teams of older adults for this annual event. Held at the Ferndale Community Sports Centre in Brixton, London, teams travelled from across London and Surrey leisure centre partnerships run and managed on behalf of local councils by Better, including Lambeth, Tower Hamlets and Reigate & Banstead.

Both walking football and walking netball are held during a separate event a week before the main event takes place on Thursday 19th September. Teams who competed in the walking sports collected valuable points, which will go towards their final totals. The Copperbox Arena at the Queen Elizabeth Olympic Park will host the remaining sports of Darts, Dominoes, Timed Cycle, Timed Swim, Badminton, Short Tennis, Table Tennis and Short Mat Bowls, where the overall winners will be announced. In 2018, Epsom & Ewell were just pipped to the post by rivals Greenwich, who won by just a 20 point lead.

The Club Games is a celebration of our Club membership, which encourages those aged over 60 to stay fit and active, leading healthy lifestyles, with a wide variety of activities on offer. The Rainbow Leisure Centre provides an extensive program for those living locally, including Tap Dance, Aqua Aerobics, Strength & Balance classes alongside Badminton, Short Tennis and Yoga as part of the Club Membership, with many of these classes also offering affordable drop-in prices.

It would seem that no matter your age, a passion for winning and a competitive attitude is still alive and kicking!

Macmillan Centre Manager Celebrates 21-years at Cancer Centre And 43 years in the NHS!@Epsom_StHelier @ macmillancancer
Sign up for offers
Sign up for what's on guide
Become an author
Popular Categories
By clicking 'ACCEPT', you agree to the storing of cookies on your device to enhance site navigation, analyse site usage, and assist in our marketing efforts.
For more information on how we use cookies, please see our Cookie Policy.