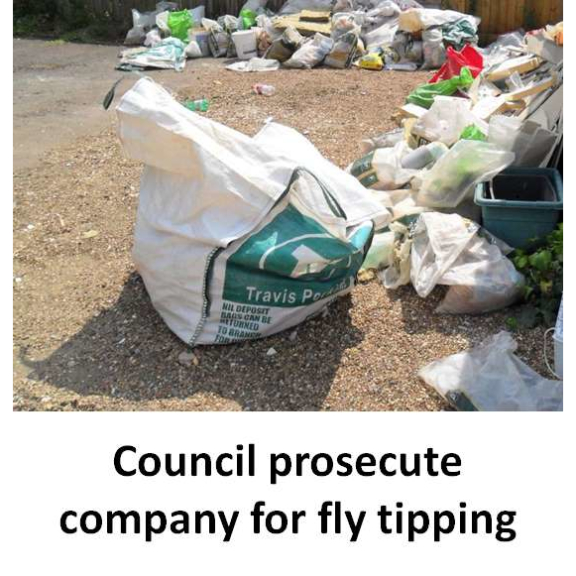 Epsom & Ewell Borough Council has successfully prosecuted a building company for failing to comply with their Waste Duty of Care in disposing of their building waste that was later fly tipped in the College Ward area of Epsom.

Streich Construction Limited pleaded guilty to two offences in Redhill Magistrates’ Court on Tuesday 11 March 2014. The offences related to the failure to control waste produced from building sites in the Clapham area, as well as an additional offence for failing to produce documentation to Epsom & Ewell Borough Council to show that relevant checks had been made to ensure they were giving their waste to a registered waste carrier.

Streich Construction Limited had given their waste to an unregistered waste carrier who had not provided them with any documentation to prove that the waste would be disposed of in a lawful manner. The waste was later fly tipped in Epsom. The Council's Environmental Health Officers were able to gather evidence from the scene to identify where the waste had originally come from and found that Waste Duty of Care offences had occurred.

Streich Construction Limited was fined £500 for each offence and ordered to pay £400 towards the Council’s costs along with a £50 victim surcharge.

Councillor Jean Steer, Chairman of the Social Committee said, "Fly tipping is unsightly, stops people enjoying and using our public places and can be dangerous – it is also unnecessary and a criminal act. As this case demonstrates, it is not just the unscrupulous individual who actually fly tips who can be prosecuted, it is also the person or organisation that fails to ensure their rubbish is not disposed of lawfully.  Dispose of your waste responsibly and help continue to keep our Borough clean and beautiful”.

Under the Waste Duty of Care, everyone, including homeowners, tenants and businesses, have legal responsibilities to ensure that their rubbish and unwanted items are disposed of lawfully. This can be done by taking it to the tip or by giving it to someone who is registered to dispose of rubbish and has the appropriate written documentation showing this.

Epsom & Ewell Borough Council will do everything it can to track down those responsible for fly tipping.  If residents spot someone fly tipping, they should let the Council know so it can try to catch those responsible. To report fly tipping call 01372 732000 or visit www.epsom-ewell.gov.uk