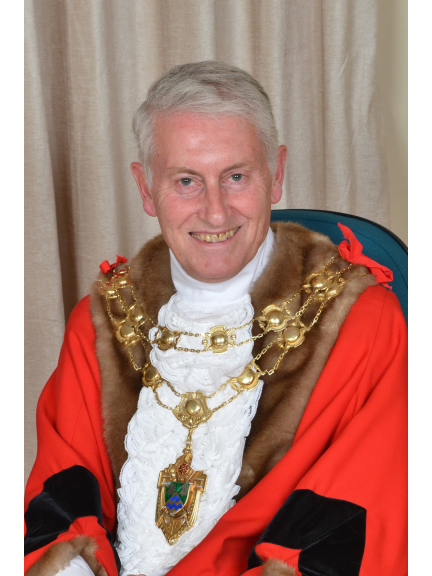 The Mayor is the first citizen of the Epsom & Ewell Borough and has several specific roles during their one-year term of office. These include representing the Council and local community at formal and ceremonial occasions, both within the Borough and elsewhere, and chairing full meetings of Council.

As Mayor, Chris has decided to raise funds for the local branches of Age Concern and Riding for the Disabled.  He has also developed a new branch of the Surrey wide charity the Community Foundation for Surrey. The new section is now known as the Epsom & Ewell Community Fund, and Chris has already raised a significant sum for it with the considerable assistance of Epsom Coaches. The purpose of this fund is to enable local charities and organisations to request funding for their own projects within the Borough. It can step in when sudden needs for financial help arise which are not covered by existing charities.

Chris joined the Woodcote Residents’ Society Committee in 1990, and three years later became its Chairman, a post he held until he was elected to Surrey County Council in May 1997. He served as a County Councillor for 16 years until he stood down in May 2013.  He was Leader of the RA/Independent Group of County Councillors for a period.

He was also a School Governor at Epsom Downs Infant School and continued when it was rebuilt as The Vale Primary School.  He served on the Members’ Steering Group of the Lower Mole Countryside Management Project for 16 years and, with their help, was instrumental in developing the Woodcote Millennium Green Trust, a registered charity.  This has safeguarded the land opposite the back of Epsom General Hospital from any possibility of development, and is a much appreciated local feature.

Chris was elected to the Borough Council in May 1999, but lost his seat in 2003.  He was re-elected in May 2011 for Nonsuch Ward, part of which was in his County Council Division.  In his first term on the Borough Council he became Chairman of the Epsom & Walton Downs Conservators.  In 2013 he became Vice Chairman of the Leisure Committee, and in that capacity has been pleased to support the many activities organised by the Council’s Leisure Development Team.

Chris was born in London and brought up in Highbury. He took a degree in Industrial Chemistry at The City University, where he met Liz. On graduating, he joined BP as an Industrial Chemist. After retiring he was elected to be a Member Nominated Director and Trustee of the BP Pension Fund.

Chris married Liz in 1969 at St Mary’s Church, Cuddington.  They moved to Epsom in 1976.  They have a daughter and son, both married, and three grandchildren. Interests, in addition to the grandchildren, are playing badminton, walking in the Borough and in Dorset, helping to maintain the Millennium Green and growing a variety of soft fruit.