‘Ready Steady for the Charity Walk for Peace’

The Charity Walk for Peace Charity Reception Dinner was held at The Guildhall in Kingston on Saturday February 24th 2018 where over 65 guests, including many charities, attended to show their support for the upcoming Charity Walk for Peace being held on Sunday April 29th 2018 in the Windsor Great Park in association with Runnymede Borough Council.

Rt. Hon Sir Edward Davey MP graced the occasion and spoke at length about the incredible success of the annual Charity Walk for Peace and was followed by a number of Mayors from the Boroughs of Kingston, Epsom, Sutton, Elmbridge and Runnymede.

The Dinner provided an opportunity for participants to meet the organisers and sponsors of the annual Charity Walk for Peace and brought together a host of charities and beneficiaries, MP’s, Mayors and local community groups, as well as representatives from the media, with the objective of introducing them to this year’s National Walk, its aims and objectives, and its fundraising efforts throughout the previous year.

Her Worshipful the Mayor of Kingston upon Thames, Councillor Julie Pickering recorded a special video message prior to the Charity Reception where she said:

"I’m really supportive of the Charity Walk for Peace, not only does it allow any organisation or charity to take part in it, but particularly for the Kingston charities to actually take part. It’s a 5 mile walk around Windsor Great Park in Runnymede on the 29th April and not only will it be a fun day out to raise valuable funds for whatever your organisation in Kingston is, but the Charity Walk for Peace also match fund whatever your organisation raises by £2,000.”

The President of the Ahmadiyya Muslim Elders Association, who sponsor the annual walk, Dr. Ijaz Ur Rehman, said:

“I am so grateful to you all for taking time out of your busy schedules to attend this evenings Charity Reception. We are so fortunate that today we have Sir. Edward Davey amongst us, five Mayors of Boroughs and the Superintendent for Kingston Police. With your support, we are confident that this year’s Charity Walk for Peace will be best one yet, so let us work together towards the one million target.”

As in previous years, similar Charity Reception Dinners are being held across the UK enabling communities and members of the public to engage with the Charity Walk for Peace.

All community groups, charities, school and supporting organisations are invited to join us and help raise funds for the many hundreds of deserving charities across the UK.

Special message from the Mayor Of Runnymede

TO REGISTER FOR THE CHARITY WALK FOR PEACE, please visit: 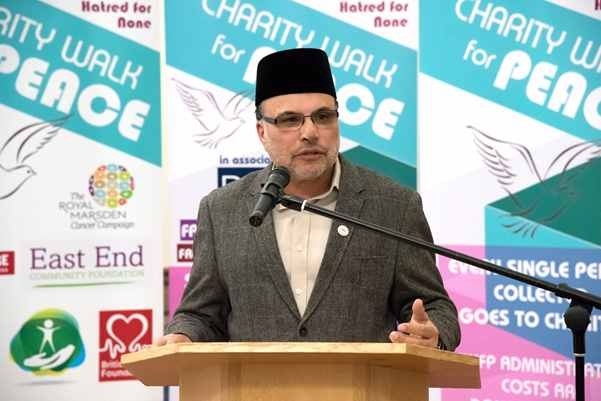 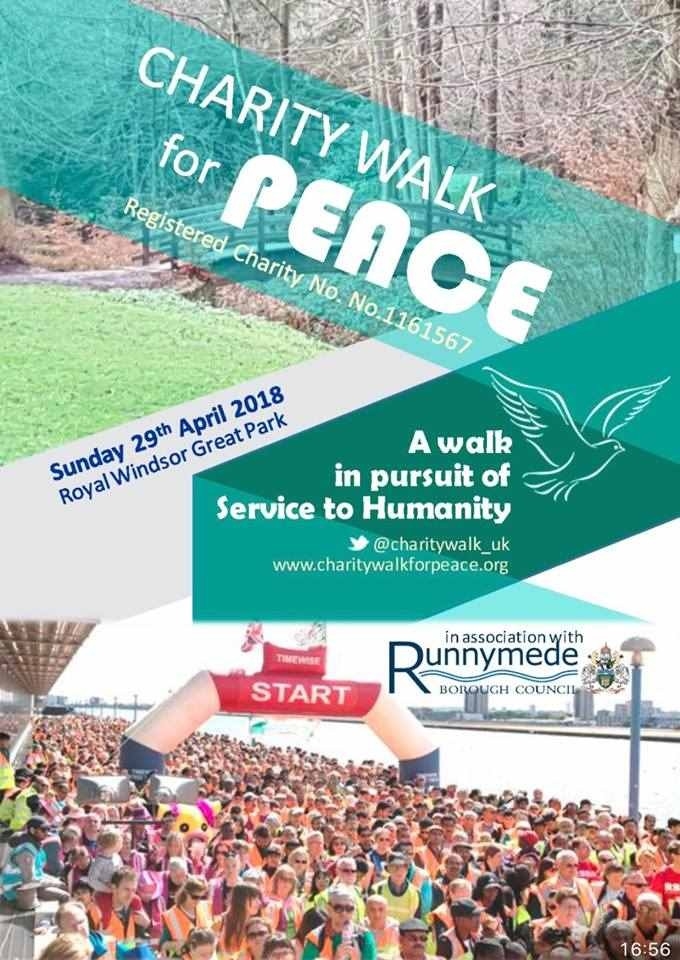