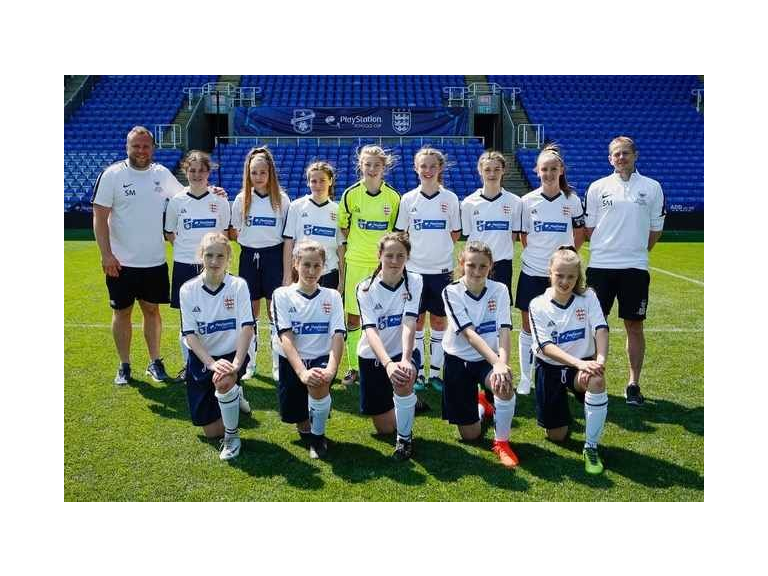 The Blenheim High School Under 14's Girls' Football Team went to the Madjeski Stadium in Reading on Wednesday 23rd May to compete in the ESFA PlayStation Under 14 Schools Cup Final and were crowned National Champions in what is the showpiece game in school football.

The Girls have worked tirelessly to win through eight rounds of the National Competition and, having already been crowned Surrey Champions earlier in the month, are thoroughly deserving of the much-coveted title a nerve-racking match.

The game started in bizarre fashion with Blenheim's opponents Durham Johnston School opening the scoring after just 30 seconds.  Within minutes Blenheim had equalised with captain Amelie firing into the top corner from 25 metres after some great work from team mate Amie.  With just 6 minutes on the clock Durham Johnston regained the lead - once again from a long throw.  Blenheim then found themselves 2 goals down as they conceded a penalty after 18 minutes.

Even with the score at 3-1 to Durham Johnston, Blenheim were by far the superior side. They created chance after chance, but were failing to capitalise, until in the first-half injury time Becca grabbed a crucial goal just before the stroke of half time.

The second half mirrored the first, with Blenheim playing some excellent football which forced Durham Johnston to defend from the outset.  After 10 minutes of the half the pressure told, with Amie, once again, playing a crucial part in setting up teammate Bronte for a great half volley finish at the back post.  The game settled into a pattern with Blenheim applying constant pressure.

With 2 minutes left of injury time it looked like the match would be heading for penalties. However, Blenheim's hard work and perseverance paid off and with a great ball from Player of the Match Amelie that found Becca, who coolly slotted the ball past the goalkeeper. Blenheim went into the lead for the first time with 30 seconds left to play! The whistle sounded and Blenheim were crowned National Champions in front of around 50 travelling supporters!

The celebrations were fitting of such an occasion and the girls can now deservedly hold their heads high as double winners. Well done to the girls and the dedicated and hardworking PE department at Blenheim High School for coaching them on the road to success!