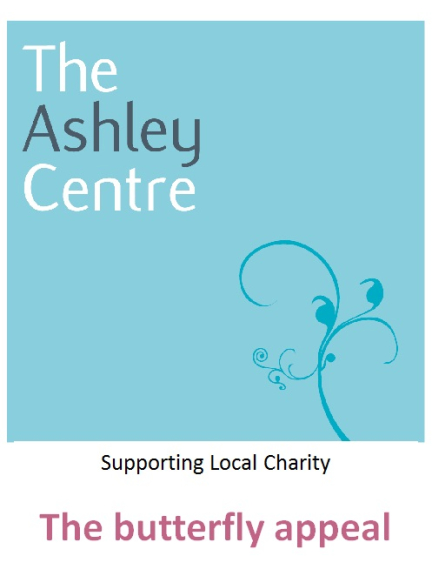 The Ashley Centre has announced that it will be supporting local charity THE BUTTERFLY APPEAL throughout 2013.

Centre Manager David Beddows said: “The Butterfly Appeal is close to the hearts of many of our shoppers and we feel it's a great privilege for The Ashley Centre to be able to support the appeal for a second consecutive year. We're going to work hard to build on the total achieved by The Butterfly Appeal in 2012 and look forward to holding another Butterfly Week this Autumn to both help raise awareness of the fantastic work the charity is doing locally and play a small part in much needed fundraising."

Established in 1991, The Butterfly Appeal focuses on palliative care in the Surrey region and has raised many thousands of pounds over the past 20 years. It has made a positive impact on hundreds of people’s lives and continues to provide much needed funds for essential facilities in the area.

The Butterfly Appeal is planning many events in The Ashley Centre throughout the year, not only during the Butterfly Week. In 2012, the appeal was amazed at the generosity of the Epsom shoppers and grateful to The Ashley Centre for choosing them as their charity. Last year, the total raised was over £1,100 and it is hoped that figure can be topped in 2013.

This year will be full of Butterfly Appeal events, and during that time an announcement will be made about an exciting new project that they are supporting at Epsom General Hospital.