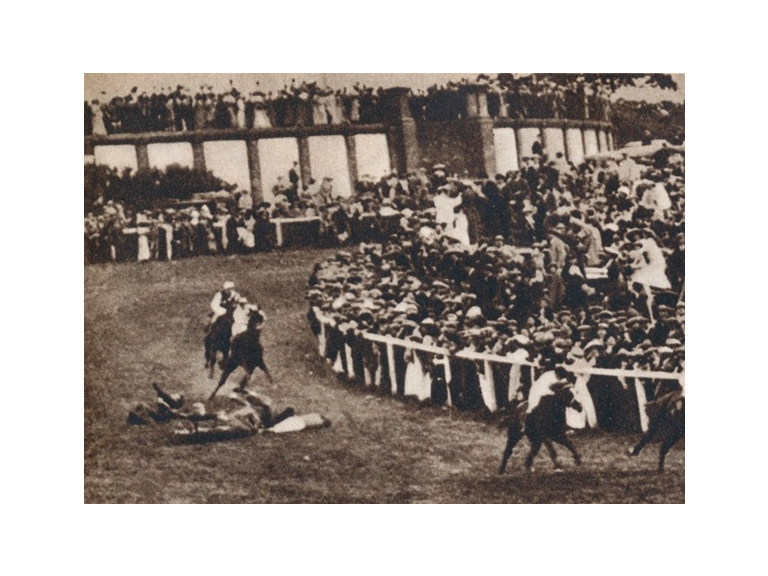 Meet the most militant suffragette in Britain

Dying for the Vote

She died for women

One hundred years ago in June 1913, amid the carnival spirit of Derby Day and in the presence of King George V and Queen Mary, a militant suffragette named Emily Wilding Davison sacrificed her life for the cause of women’s human rights.

The coroner recorded Misadventure but was it an intentional sacrifice?

Weigh the evidence for yourself at the exhibition – Dying for the Vote.

Emily’s urgent message to the King

Emily was fatally injured during the running of the Derby in an attempt to send a message to King George V that his female subjects were being repressed past endurance by government.  Her intention was to run on the track and wave the flag of the militant Women’s Social and Political Union in front of newsreel cameras.  Tragically, Emily collided with the king’s horse, Anmer.

Throughout the nineteenth and well into the twentieth century, successive male governments chose to repress women’s claim to human rights.  Most men interpreted ‘the woman question’ in the light of their own prejudiced period.

In 1903, despairing of the political stalemate on women’s rights, Emmeline Pankhurst formed the militant Women’s Social and Political Union.  Deputations of voteless women who tried to communicate with the Prime Minister on the issue were convicted of ‘obstructing the police’ and jailed as common criminals.  In 1909 imprisoned Surrey artist Marion Wallace Dunlop went on hunger-strike for political prisoner status.  In order to avoid the responsibility of having suffragettes die in prison, the government introduced the torture of forcible feeding.

Men like Frederick Pethick-Lawrence (1871-1961) of Dorking supported the women in their struggle.  As a result he was imprisoned and brutally force-fed like the women, then declared bankrupt.

A Call to the Nation

But the women’s cause was still ignored.  Women like Emily Davison tried acts of violence as a wake-up call to the nation.  Emily set fire to a pillar-box, gave herself up to police, and was sentenced to six months in Holloway Prison where she went on hunger-strike and was force fed.

Emily Davison came from a large and resourceful family that originated in Northumberland.  She had been awarded a first class honours pass from Oxford University.  This was at a time when women were denied degrees at universities, limiting employment prospects.  Emily persevered to obtain a degree from London University, the first to award degrees to women.

In company with many others who joined the Women’s Social and Political Union, Emily Davison saw the right to vote in Parliamentary elections not as an end in itself, but as a gateway through which women could influence the fair funding of facilities such as maternity and child care, or help for widows.  Equal opportunity in the workplace was high on the agenda, as was gender-based legal and moral reform.

In 1913, WSPU leader Emmeline Pankhurst, in her fifties, was sentenced to three years’ imprisonment.  Since she was pledged to hunger-strike, there seemed no end in view but her early death.  This lent urgency to Emily Davison’s message to the King at the one place and time when he was accessible to the public – at the Derby.

On Derby Day, 4th June 1913, Emily Davison was forty and athletic although worn down by forcible feeding.  She was a keen cyclist and early in her career had turned down an opportunity to swim professionally.  She may have felt confident she could dart across the path of oncoming horses to the other side of the racetrack safely.  If so, she tragically misjudged.  Flying hooves struck her head.  Emily died four days later, without regaining consciousness, in Epsom Cottage Hospital.

Although the WSPU accorded Emily a martyr’s funeral, her death accomplished little politically.  It took the First World War, in which women proved their loyalty alongside their men, to set in motion true democracy.  Voting rights for British women on the same terms as men were granted finally in 1928.

From 7th May to 27 July this year, Epsom & Ewell commemorates the death of Emily Davison (1872-1913), and the cause for which she died, with a pivotal exhibition guest curator Irene Cockroft  at the Borough Museum at Bourne Hall Community Centre, Spring Street, Ewell, Surrey KT17 1UF.  Please visit between 9am and 5pm, Tuesday to Saturday.   Free entry to exhibition; parking available; easy access by bus or train (Ewell West Station); telephone 020 8394 1734;  www.epsom-ewell.gov.uk.