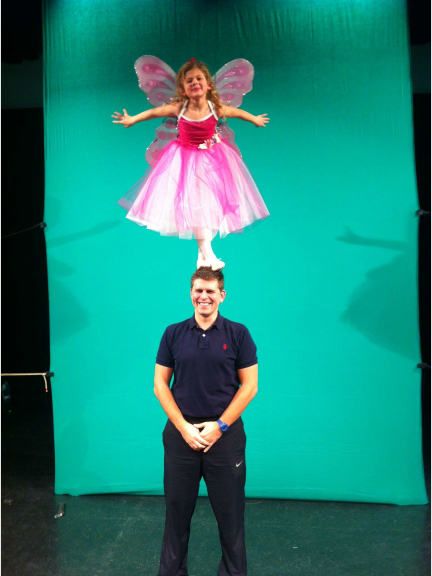 The winner of the Epsom Playhouse pantomime Tinker Bell YASMIN CRAIG has now been filmed for her role in Peter Pan.

6 year old Yasmin from Ashtead was attached to a flying harness and flown on the Playhouse stage. She was filmed flying and saying her lines and now the theatre’s graphics team will integrate this film into the pantomime and her image will appear in every performance.

Yasmin took a break from filming to have some fun when she acted standing on her father David Craig’s hand and head!

Peter Pan opens on 13 December and runs until 5 January. Tickets are £11-£18.50 and are on sale now and can be booked by going to: www.epsomplayhouse.co.uk or by calling the Box Office on 01372 742555. You can also find us on facebook: epsom.playhouse

article and pictures from Epsom Playhouse