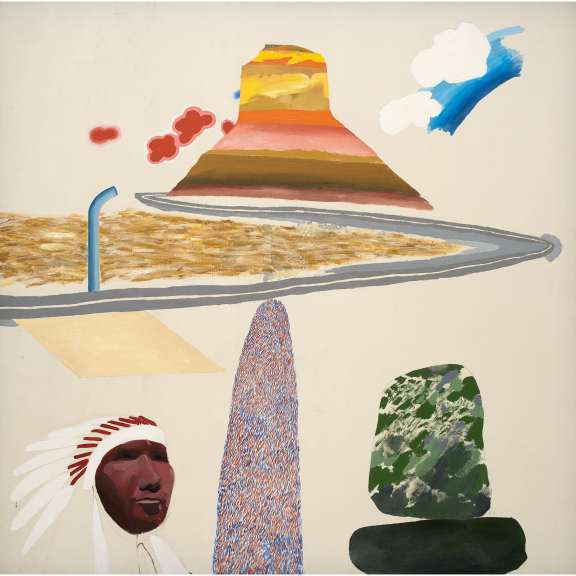 A major exhibition of the early works of Alan Davie and David Hockney, exploring the convergence between these two key figures of post-war British painting.

Towner are pleased to present a major exhibition Alan Davie (1920–2014) and David Hockney (b. 1937) that will explore the convergence between these two major figures of post-war British painting.

Organised by Hepworth Wakefield, Early Works will bring together around 45 paintings, collages and drawings by Davie and Hockney, spanning from 1948-1965. It will trace the parallel paths of these key figures of post-war British painting and reveal shared preoccupations with passion, love, sex and poetry as their work oscillated between figuration and abstraction. Early Works at Towner is the first major display of works by both artists on the South Coast.

Early Works includes figurative works made by both artists at the start of their careers, including self-portraits produced when Hockney and Davie were both 16 years old. Self-portraits and photographs throughout the exhibition will show the development of each artist’s public persona at a time when contemporary art was becoming a central part of popular culture – artists appeared in films, were interviewed on television and featured in the new colour Sunday supplements. Both artists cultivated distinctive looks, exploring differing but connected notions of masculinity and identity. Both shrugged off labels, Davie refusing to be dubbed an ‘Abstract Expressionist’, and Hockney similarly eschewing the term ‘Pop artist’.

Themes of poetry, love and eroticism explored by both artists will be examined through paintings including Hockney’s celebrated We Two Boys Together Clinging (1961) and Davie’s Glory (1957). The visitor will see how both artists pushed and tested the painted surface, often incorporating coded symbolic text and abstracted figures to create new visual languages and passionate painterly expressions. The exhibition will also explore work from the 1960s when both artists combined interests in non-western culture with contemporary influences including American abstract painting and advertising.