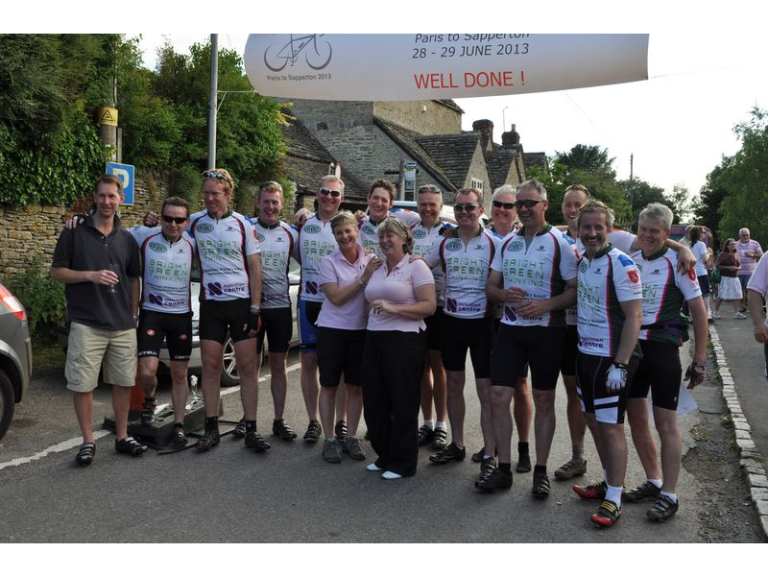 240 miles in 36 hours was the challenge and we are thrilled to announce our determined dads achieved this and with time to spare. The cyclists arrived back in Sapperton from Paris, to an emotional homecoming reception from the school and villagers. Children of the cyclists and from the school, joined the procession for the last mile on their bikes, and helped to celebrate their fathers' brilliant achievement.

The fact that Rob Macmichael who organised and planned this challenge, inspired so many of the friends and parents of our small school, to sign up to a gruelling training regime and finally this testing challenge, has been an amazing achievement in itself. The support crew must also be mentioned, as they played a vital part to the success of the challenge. Included in the team was the school's French teacher, who saved the day by intervening with the French Customs Officials, when they threatened to unload a vanload of bikes minutes before the ferry sailed.

Other adventures included a hazardous circuit of the Arc de Triomphe; getting split up by the traffic lights of Paris; a brush with a French motorway; an unplanned walk across a wide river bridge; breakdown of the support van and the nearly missed ferry all added to the tale. The spare bike was well used when the front fork broke on one bike, 5 miles from home. So when a chain broke less than a mile from the finish, the rider had to borrow his nephew's mountain bike to reach the School.

However, on returning, all the cyclists have said how positive this experience was for them personally. Keith Austin said "What a ride! What a team! It's been amazing to be part of this."

We have also found out we had smashed our original target of £14,000. The amount raised so far is £18,000. So instead of just contributing towards a sensory stimulation machine for the Emily Kent Paediatric Unit at Gloucester Hospital, we can buy one outright and the rest of the money will go towards completion of the two brilliant new classrooms at Sapperton Primary School.