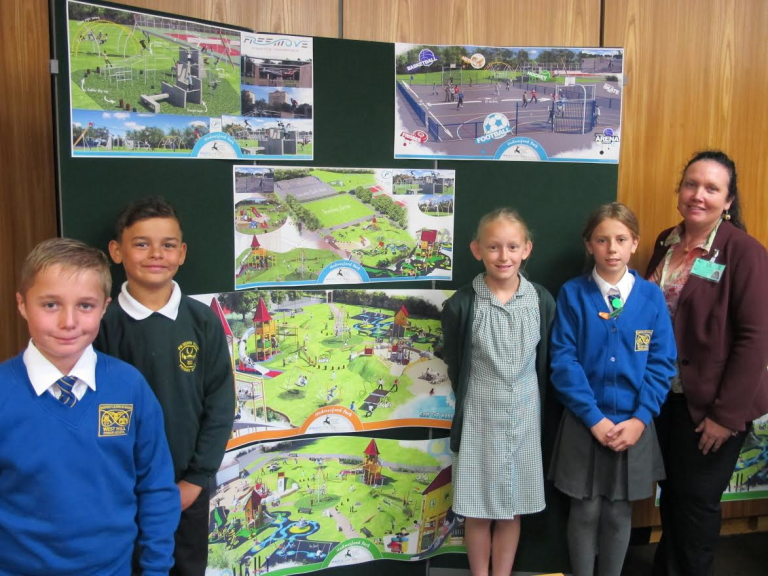 Children from local schools ran their expert eyes over the company’s designs and grilled representatives after they had presented their company’s visions for the play areas. The five prospective suppliers had all designed their play areas based on children’s ideas from a consultation event in 2012.

There will be two new play areas in Hednesford Park as part of the improvement works – a junior and toddler play area, and an area for older children including a skate plaza. They will be located next to a refurbished pavilion, which will feature a ground-floor café.

Cllr Christine Mitchell, Cannock Chase Council Culture and Sport Portfolio Leader, said: “Right from the start we have tried to involve young people from Hednesford in our plans for the park. They’re the ones who are going to be using the new play areas, so it’s really important that they are happy with what’s planned. Once the supplier is selected to provide and install the new play areas, local young people will continue to be involved.”

The installation of the new play areas will commence in the spring of 2015, starting with the skate park and senior play area.

Major improvement works are now under way at the park following the award of a Heritage Lottery Fund grant in December 2012. New tennis courts have already been installed and a raft of other improvements will be made up to 2017, including a refurbished pavilion, new play areas, skate park and outdoor gym, extensive planting, increased parking and more.

For more information about the improvement works at Hednesford Park – including a community activity plan and volunteering opportunities - call Lynn Evans, Cannock Chase Council's Community and Education Officer for Hednesford Park, on 07896 239717 or email lynnevans@cannockchasedc.gov.uk