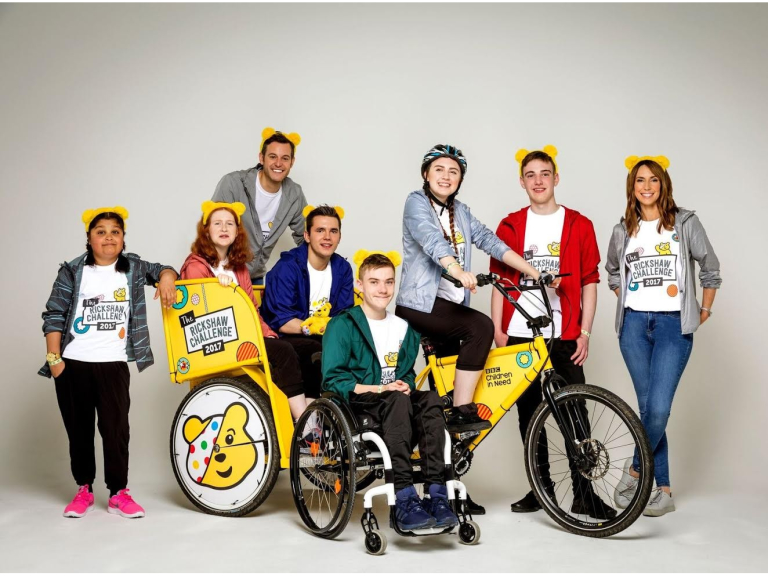 The Rickshaw Challenge is set to stop in Cannock on Saturday 11 November at approximately 6pm, after setting off from the One Show studio on Thursday 9 November and aims to cross the finish line in Glasgow on Friday 17 November during the BBC Children in Need’s 2017 appeal show.

The team of six have all been supported by BBC Children in Need funded projects and will push themselves to the limit, battling steep hills and braving the elements in the hope that they can raise as much money as possible, which will go on to make a difference to young lives across the UK.

Cycling alongside the team once more is The One Show’s Matt Baker, who will go on the road offering support and advice throughout the journey.

Since 2011, The One Show’s Rickshaw Challenge has raised over £16 million for BBC Children in Need, with every penny going on to make a difference to lives of the children and young people across the UK who need it most.

Councillor George Adamson, Leader of Cannock Chase Council said, “I am delighted that Cannock has been chosen as one of the stops for Team Rickshaw.  The Rickshaw Challenge shows that despite the challenges these young people have faced during their lives, they can achieve so much and help others just like them.  I am in awe of what these children have done so far and I wish them all the luck in the world on completing the challenge ahead,  I will be following their journey and urge residents in Cannock Chase to show their support if they see them on the road.”

The One Show viewers will be able to follow Team Rickshaw’s progress on the show each day, but the full route – including a real-time update of the rickshaw’s progress – is also available at http://pudsey.viewranger.com/.

The team taking on this year’s challenge is made up of:

Sabah (18) from Birmingham. As a baby, Sabah was diagnosed with cancer in her kidneys and lungs. Both kidneys and part of her lungs were removed and at one point Sabah was given only a thirty percent chance of survival. Thankfully, she pulled through and was later given a kidney transplant which allowed her to live a fuller life. Then in 2013 her kidney suffered damage and had to be removed. Sabah is now on dialysis and awaits another kidney.  Despite this, Sabah is still able to take part in the challenge and will undergo dialysis at various points on the journey. She has been supported by Same but Different, a project part funded by BBC Children in Need.

Greg (18) from Dunfermline.  Greg had a very difficult upbringing. As a youngster he was often left on his own, regularly went hungry and lacked emotional support. His life changed when he started attending Scottish Sport Futures’ Twilight Basketball group. The BBC Children in Need funded project introduced him to one of his best friends, whose family not only welcomed him into their lives, but into their home. The family stepped in and fostered Greg when he was at his lowest point, helping him to feel cared for and ensuring that he no longer felt alone.

Shona (17) from Inverness. At age 15 Shona was diagnosed with Nieman Pick Type C - a rare neurodegenerative condition that causes her difficulty with movement, talking and eating. Although she knows her condition may worsen, she is positive and optimistic about life. Niemann-Pick UK, a project funded by BBC Children in Need, has been a lifeline to Shona and her family, giving them practical and emotional support throughout her diagnosis.

Luke (17) from Wirral. Luke has cerebral palsy. Over the years he’s faced complicated leg surgery and lengthy periods of rehabilitation. Yet, Luke’s tenacity has meant that he’s let nothing get in his way. Now aged 17, he’s had considerable achievements in school and sport, and credits Stick ‘n’ Step’s conductive education, physiotherapy and support with giving him greater independence and confidence. Thanks to UK fundraisers, the project has benefitted from BBC Children in Need funding for nine years.

Liv (19) from Stockport. Last year Liv’s dad lost an eight month battle with pancreatic cancer. She found his terminal illness and death very difficult to deal with, and struggled with feelings of sadness and anger. Since then, Liv has received bereavement support from a BBC Children in Need funded counsellor at Blythe House Hospice, giving her the space to come to terms with her loss.

Ben (16) from Mold, North Wales. Ben helps care for his elder sister Amy (26 years old), who has Cockayne Syndrome (CS), a progressive condition that has caused her health to deteriorate since the age of 14. Ben’s mum started a project called Amy & Friends, which supports children affected by CS and their families. BBC Children in Need funding for the project has meant that families impacted by this rare condition are not alone. Ben will be undertaking the rickshaw challenge in her honour.

Team Rickshaw aims to be in Cannock Town Centre on Saturday 11 November, their route summary is as follows:

The BBC Children in Need 2017 Appeal show is on BBC One on Friday 17th November.

To support the challenge, you can donate either £5, £10 or £20 by text.  To donate £5 text the word TEAM to 70405. To donate £10 text TEAM to 70410. To donate £20 text the word TEAM to 70420. Texts will cost your donation plus your standard network message charge.  All of your donation will go to BBC Children in Need. You must be 16 or over and please ask for the bill payer's permission.  For more information and full terms and conditions go to bbc.co.uk/pudsey. The Text to donate Service will close at 23:49 on the 31st December 2017.