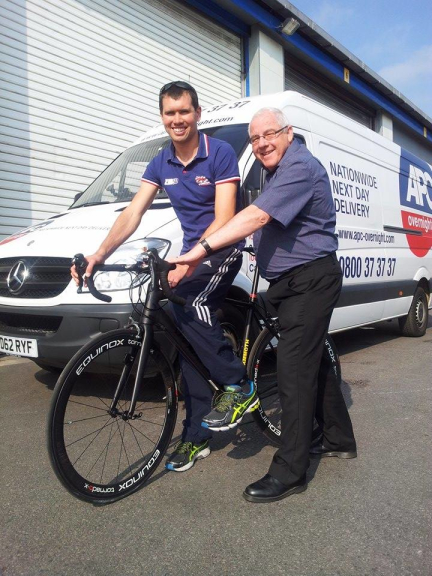 Phil Wolfe, of Cannock, is all set for Chicago where he will be up against competitors from around the world and has been supported by Bridgtown-based EDS Couriers.

Phil is taking part in an Aquathon contest, which includes a 1,000 metre swim and 5km run on Wednesday, September 16 and Triathlon World Championships on Saturday, September 19.

Andy Evans, managing director at EDS has known Phil for around five years and has helped cover the cost of physio and coaching, as well as entry fees for competitions.

Phil said: “I’m extremely grateful for all the support Andy and the team at EDS have given over the years, to help send me on my way to Chicago. They have also helped spread the word and raise my profile. ”

Andy added: “We’re delighted to support Phil, he works so hard at his sport and his commitment is outstanding. We wish him every success in the world championships.”

Phil trains for around 20-24 hours a week, getting up each morning to spend time swimming, cycling and running. He has enjoyed excellent results in recent events across the UK, with a win in Paignton, Devon and in Llandudno in June.

He added that he would like to appeal for further backing from businesses.

“I’d appreciate the chance to talk to more companies who could sponsor or support me in other ways,” said Phil.

“I love what I do but it’s an expensive business, sponsorship from local firms would be mutually beneficial and I’d welcome the opportunity to discuss this.”