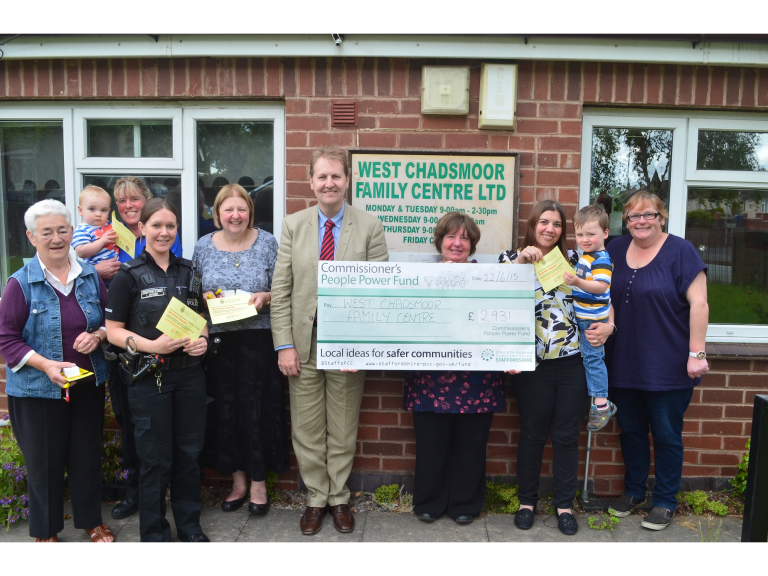 West Chadsmoor Family Centre has been awarded funding to set up weekly café sessions for residents to discuss their feelings about policing and safety. They also have numerous talks about how vulnerable and elderly people can help to prevent door-to-door sales and how to stay safe.

The fund is supporting locally-driven community safety activities in local areas throughout Staffordshire and Stoke-on-Trent.

Mr Ellis said: “The Commissioner’s People Power Fund puts half a million pounds back into local communities and is easy and simple to apply for.

“The café helps to bring communities together and is a way for local people to talk about their thoughts about safety and to seek help if needed.”

Heather Preece, Family Centre Manager, said: “The café has benefitted local people by allowing them to tell us their concerns about their local neighbourhood and detail what aspects of safety can be addressed to help residents feel safer.

“We will now be able to use the information received to help break down barriers and respond to local needs.”

The People Power Fund is one part of £2.5 million of Commissioner’s Community Funding for 2014/15.  The Commissioner’s Locality Deal Fund has allocated money to local areas through working in partnership with local district and borough councils. Meanwhile, the

Commissioner’s Proceeds of Crime Fund is seeing 100 per cent of funding received by Staffordshire Police going back into local communities, through grants of between £3,000 and £15,000. It is made up of money seized from criminals as Staffordshire Police continue to strip offenders of their assets.

Successful projects in all three funding streams will deliver what’s important to local people based on the four priorities set out in the Commissioner’s Safer, Fairer, United Communities Strategy – tackling the root causes of crime through early intervention, supporting victims and witnesses better, reducing reoffending and increasing public confidence.