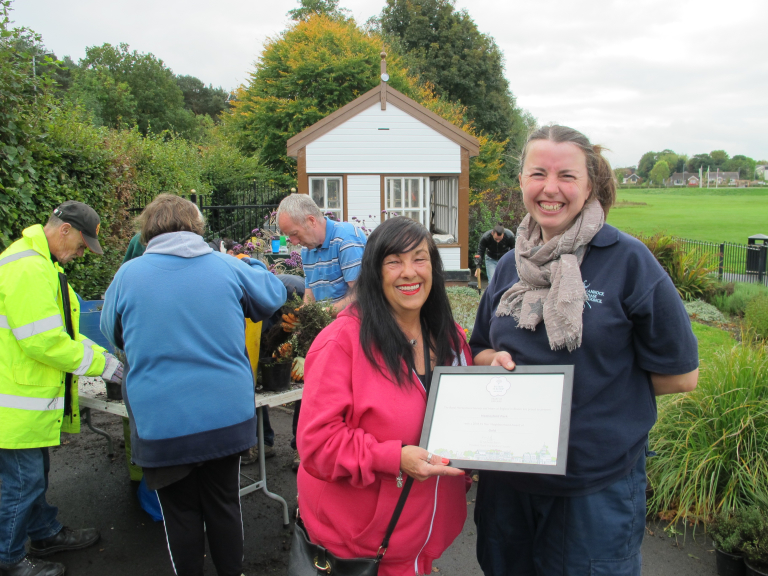 On 20 September representatives from Hednesford Park were delighted to pick up a gold award from The Heart of England, Britain in Bloom with the Royal Horticultural Society's 'GOLD 2018 It's Your Neighbourhood Award' at the ceremony in Acocks Green.

Officers and volunteers at the park work throughout the academic year with local schools learning about the environment, composting, Learning all aspects of gardening and working towards the Schools RHS gardening Award.

Local schools take part in forest schools; adults have taken part in Social Forestry sessions where they learn the importance of our trees, mental wellbeing and taking part in craft activities that recycle our natural resources.

horticultural campaigns in Europe, involving over one thousand communities across the

Councillor Christine Mitchell, Portfolio Leader for Culture and Sport said “This is a fantastic achievement and is well deserved for the team of volunteers who work tirelessly all year round in the park.  This year has been particularly testing with the weather conditions and they have done amazingly well to not only retain its Green Flag Award from the Government’s Ministry of Housing, Communities & Local Government and Keep Britain Tidy but also scoop another Gold Award from the RHS.

This gold award is just one of a number of awards that we’ve received over the past years and shows the commitment given to the park by the community and our officers.”

Councillor John Preece Portfolio Leader for the Environment said, “This is fantastic news for Hednesford and the District Council.  Parks play an enormous role in people’s lives with more than half of the population visiting regularly.  Britain’s Parks provide £34 Billion in health and social benefits in addition to their role in controlling flooding, pollution and soaking up carbon dioxide/producing oxygen”

Communities that participate in RHS Britain in Bloom benefit in a variety of ways but some of the most common benefits are: Cleaner and greener surroundings, creating a sense of community through improvement of public spaces and positive interaction between community members, safer environments for the enjoyment of local people, long term improvement for the environment by addressing issues such as sustainability, resource management, conservation, litter, graffiti etc.

If you would like to know more about getting involved in Hednesford Park as a volunteer, please contact Lynn Evans, The Community and Education Officer on 07855 099353.