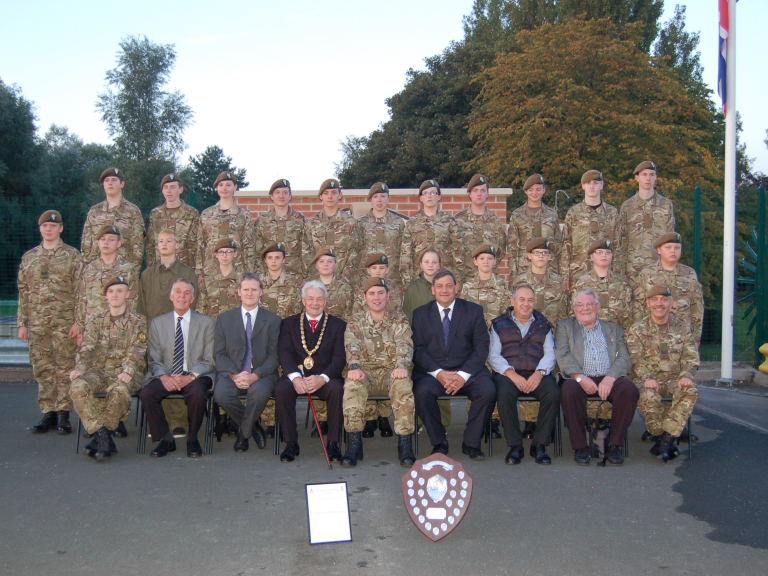 Chairman Cllr Alan Pearson and Council Leader CllrGeorge Adamsonthanked them for all their work in the local community – and congratulated them on a series of recent awards, including being named best Army Cadet detachment in Staffordshire.

Hednesford Army Cadets have won the Brenthall Bowl trophy, a Staffordshire-wide award presented to the detachment that sees the most Duke of Edinburgh Award Scheme passes. They were also awarded the Lucas Tooth Shield, the award for the best overall detachment in Staffordshire, and won the Blue Macaw Cup, a competition open to all Staffordshire detachments.

CllrGeorge Adamson, Cannock Chase Council Leader, said: “Huge congratulations to Hednesford Army Cadets for their recent successes. The detachment plays an active part in the local community and I’d like to thank them for their support for the District’s First World War commemorations and their involvement in the recent Great War marches.

“Being an Army Cadet brings much more than military exercises and training. There are so many opportunities in sport, adventures training and the Duke of Edinburgh award scheme, as well as getting involved in the local community, as Hednesford Army Cadets do so successfully. I am so impressed with the work of the Cadets, I will be awarding a grant to them out of my County Council Members Initiative Fund. ”

Council chairman Alan Pearson is also a member of the Friends of Hednesford Park’s management committee and thanked the Cadets for all their hard work supporting events that have been held in the park.

The meeting also saw presentations to Lieutenant Matt Harris and Sergeant Paul Rutter, who are leaving the Hednesford detachment to move to company headquarters andBurton.

Under Officer Matt Easterbrook from Hednesford Army Cadets said: “It’s been an incredibly successful year for our detachment and I’m very proud of our Cadets, who really do go above and beyond to get involved in the Hednesford community. We work with boys and girls from the age of 12 (and in at least Year 8 at school), of all abilities and backgrounds. Through a broad range of exciting, challenging, educational and adventurous activities, we help them develop physically, mentally and socially.”