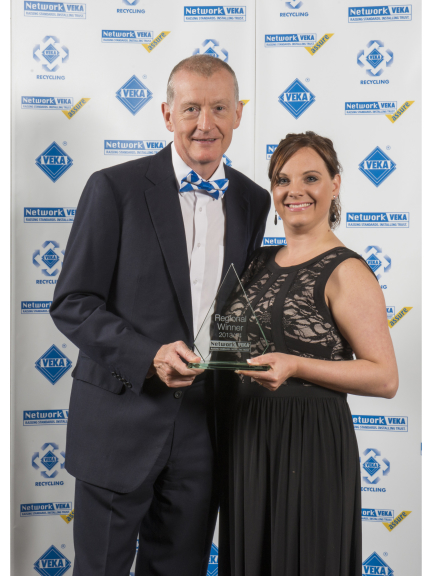 Goliath gained the highest score in the region in the survey by Network VEKA, the respected standards and guarantees body for home improvement companies across the UK.

Sarah said after the ceremony: “We’re really thrilled to receive this award again .We have always known we could live up to the standards expected by Network VEKA but now once again, we have another way of proving it to our customers. This trophy will take pride of place in our showroom along with the others.”

Goliath Homeworld is also a founder member of Network VEKA, which was established in 1996 to help quality local window, door and conservatory companies to show their quality and integrity. Now, with more than 200,000 satisfied customers, its members are still regularly audited to work to the same strict standards as well as offering the organisation’s own insurance-backed guarantees every time. Steve Davis has worked with Network VEKA for many years, helping member companies to promote those strict professional standards.

I joined Goliath Homeworld our family business in 2013, after studying travel at Cannock College and working for a local travel agent for 11 years in sales and customer care. I am the youngest daughter...