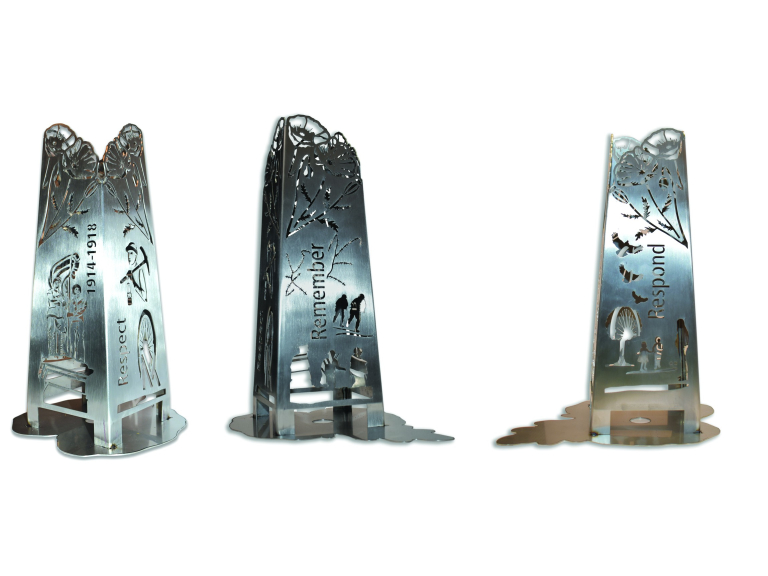 Cannock Chase Council is working with Inspiring healthy lifestyles to commemorate the end of World War 1 with `The Battle`s Over – A Nation`s Tribute` ceremony which will be held on Sunday 11 November at 6pm at St. Luke`s Church, in Cannock town centre.

A service will be led by the church followed by the lighting of the beacon at 7pm. This will mark the 100th anniversary of the Armistice which ended the First World War.

The special beacon has been designed by the Council and portrays the message of `Respect, Remember, Respond`. It has been made by Laser Process in Hednesford who have part funded its creation. The finished art feature will go on display in the District after the event with the exact location to be agreed

The beacon will be lit by Ron Mattison, a second World War veteran with the support of a local cadet and a student from South Staffordshire College.

The Staffordshire Regimental Association, with support from the Royal Engineers Association, will deliver the Last Post to pay tribute to those that fought and lost their lives in the war.

The beacon lighting forms part of `A Nation`s Tribute` which is being organised across the country to remember the huge sacrifices of millions of men and women who gave their lives for their country or returned home wounded during or after the war.

The service will end with the `Bells of Peace` ringing out in celebration of the end of the First World War.

Members of the public are invited to attend this event.

Councillor George Adamson, Leader of the Council, said: “A look at the war memorials around our District shows the huge sacrifice that was made by men from Cannock Chase and their families here at home. This event will be a moving tribute to those that sacrificed their lives for our country and will help us remember our fallen heroes.

“I would encourage you to come along and take part in this and local remembrance services across the District, marking the final First World War commemorations that are taking place during November”.

Lisa Shephard, Community Wellbeing Manager for Inspiring healthy lifestyles said: This is an amazing finale to complete our four year commitment to the centenary of the First World War and has truly brought our military, civilian and creative communities together”.

Jonathan Horne, Managing Director of Laser Process Ltd, said: “It’s been an honour to work with Cannock Chase Council and Inspiring healthy lifestyles on this inspirational project. I think everyone will agree this memorial is something to be proud of. It’s a truly memorable tribute, designed and manufactured in Cannock by local people and is dedicated to the men & women who sacrificed their all for the greater good of our country and freedom”.

This event is part of a programme of commemorations that are taking place across the District which are being supported and funded by the Council, Inspiring healthy lifestyles, and the Armed Forces Community Covenant Fund.

In addition to this, there will be a Beacon Lighting Ceremony in Norton Canes at 6.30pm at

Brownhills Road Playing Fields and in Rugeley at 6.30pm at the War Memorial on Anson Street.

As part of the commemorations, the Council is also supporting local Remembrance Services and Parades and offering promotional support. These are taking place across the District on Sunday 11 November. Further details of times and areas can be found on the Council`s website.