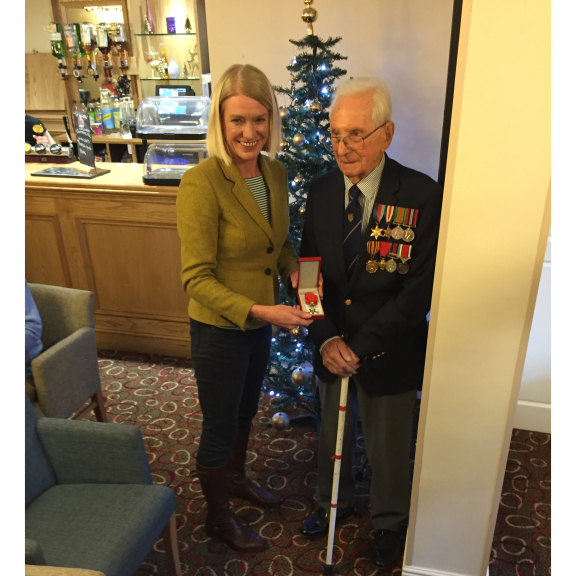 Frederick, who was a member of the Royal Artillery Regiment, took part in D-Day on the 6th June 1944, storming Juno beach with Canadian forces.

Frederick came out unhurt but was wounded five days later when a grenade was thrown into the back of Landover he was travelling in. Frederick received shrapnel wounds and was also shot in leg. He was repatriated back to a hospital ship in the English Channel.

Before D-Day, at the start of the war, Frederick had been part of the forces delaying the German advance on the Dunkirk evacuation.  At 19 years old Frederick’s efforts helped buy time for besieged forces in Dunkirk and he saw action laying traps from Belgium back to Dunkirk and engaging German forces in order to slow the German advance, efforts that saw him awarded the Belgium Medal.

His unit was one of the last to be taken off the beach at Dunkirk and he was evacuated on a Thames Estuary pleasure cruiser.

Amanda Milling said: “It was my absolute honour to present the medal to Frederick. Frederick’s stories are amazing and I can only imagine the challenges and pressure he faced in Belgium and again on D-Day. He is a real hero and deserves our thanks and admiration.”

The French Government is presenting Allied forces who took part in D-Day the Legion d’honneur medal as a way of thanking those who liberated them during the Second World War.

Sylvie Bermann, the French Ambassador in London, wrote to Frederick saying: “As we contemplate this Europe of peace, we must never forget the heroes like you, who came from Britain and the Commonwealth, to begin the liberation of Europe by liberating France. We owe you our freedom and security to your dedication because you were ready to risk your life.”