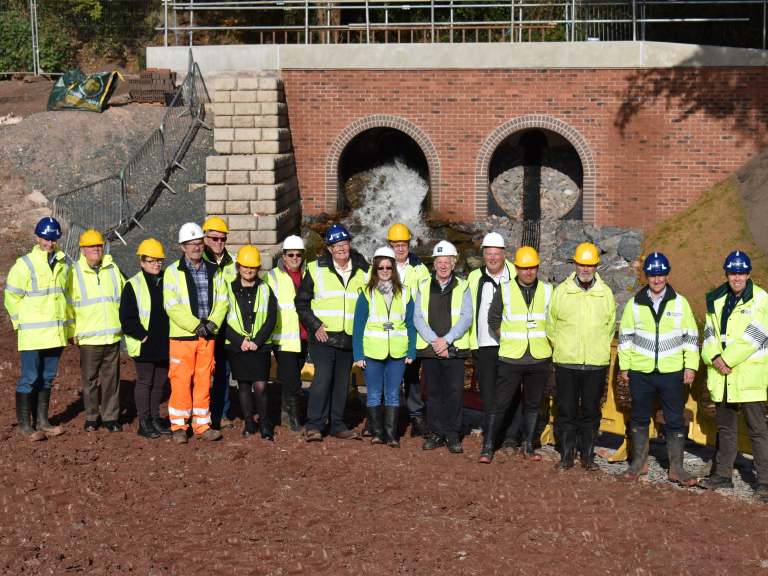 This work is complementary to the Rugeley Flood Alleviation Scheme which is currently under construction at Hagley Park and due for completion in December 2017.

Cannock Chase Council has provided funding of circa £100,000 to enable the bridge to be re-built, and with the help of the Environment Agency and their contractors the bridge has been reinstated.

The footbridge owned by Cannock Chase Council initially collapsed in 2012, which forced part of the Chase Heritage Trail to be closed and temporarily diverted. It is anticipated that once the wider flood scheme is complete and the grass has re-established, the section of the trail affected will be re-opened.

Councillor Gordon Alcott, Portfolio Leader for Economic Development and Planning said “It was essential that this work took place before the flood alleviation scheme was in place, as any access for repair work would have been difficult afterwards.

“We are delighted that the work on the bridge is nearly complete, the playing fields will re-open later in 2018 which will allow access to the heritage trail.  Works will now continue on the Flood Alleviation Scheme as the diverted flow of the water was preventing the embankment from being finished.”

“As a result of the flood works Cannock Chase Council have already received a planning application for industrial units which could create approximately 60 jobs in the area that would have been affected by flooding prior to this work being carried out.”

Will Groves Senior flood risk adviser from the Environment Agency said “We are pleased we have been able to assist the District Council in doing this work. It made practical and financial sense to fix the bridge while constructing the flood storage area, which once complete will help reduce the risk of flooding to over 270 homes and businesses in the area.”