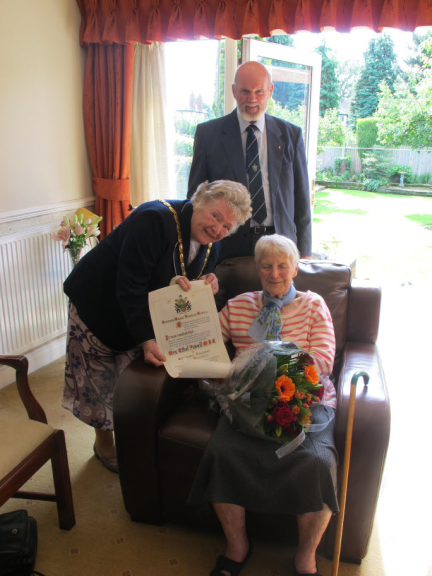 Mrs Powell was a volunteer between 1974 and June 2012 and with some dedicated friends formed the League of Friends. Over 38 years she helped to raise more than £1.5m for medical and other equipment.

The Council granted her the award at a special meeting of Cabinet on 22nd May, in recognition and gratitude for her tireless campaigning to raise funds that helped to improve the conditions and wellbeing of patients at Cannock Hospital and for residents of Cannock Chase.

Mrs Powell was today presented with a hand-decorated velum scroll and a freedom casket, by the Councilâs Chairman Cllr Doris Grice who was also joined by Cllr Gordon Alcott, family members and close friends.

Chairman Cllr Doris Grice said "this award is the highest distinction that a District Council can bestow. I am delighted to have had the opportunity to present the award to Mrs Powell, whose tireless efforts of fundraising with the League of Friends and outstanding contribution to Cannock Hospital are second to none. Cannock Chase Council are delighted to recognise the service that Mrs Powell has given to the local community."

The Freedom of the District award was created in 2012 and Mrs Powell is the first to receive this award in the District.