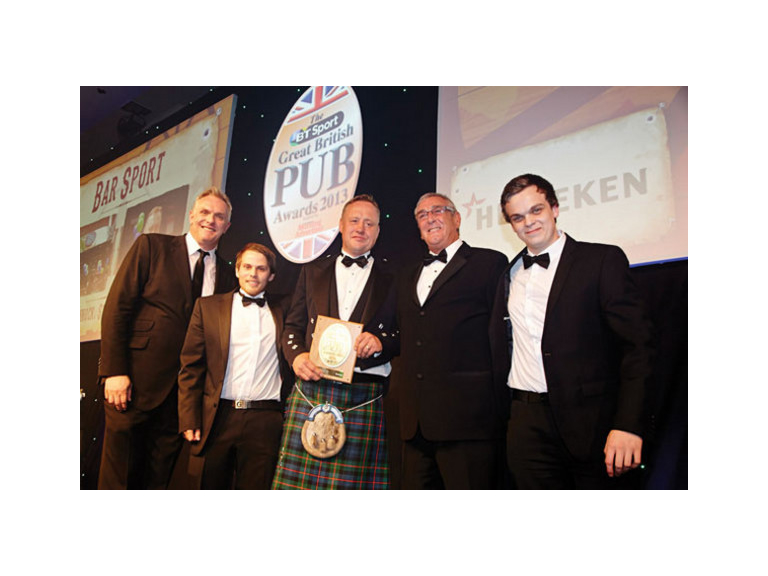 Bar Sport walked away with the prestigious award for 2013 after first winning the West Midlands and Wales regional title before beating the other regional winners from across the UK.

The judges praised Bar Sport Cannock for Sport the way in which live sport is shown every day at the venue, whatever the time which is the philosophy for the success of the bar.

Judges were also impressed with the 1,000 capacity venue, with five bars on two floors, VIP lounges, private booths, game zone and function room plus operating over 50 screens showing sport all day every day.

It was also praised for bringing in some of the biggest names in sport to the venue. This was highlighted only last week when former boxing World Heavyweight Champion Evander Holyfield visited Bar Sport Cannock and its Premier Suite for an after dinner speaking event.

The awards are organised by leading pub industry magazine, the Publican's Morning Advertiser. Staff from Bar Sport travelled down to the Hilton Hotel Park Lane London for the awards ceremony on September 12 which was hosted by Inbetweeners actor and comedian Greg Davies.

Former amateur boxing champion Scott Murray is the founder and Managing Director of Bar Sport Franchise UK Ltd which he founded at the Cannock site in 1998 after seeing the idea in Texas whilst at a Boxing training camp in the 80's.

He said: "To win the title of best sports bar in Great Britain is a fantastic achievement for Bar Sport Cannock, However, what made the night even more special was the fact that Bar Sport Maidenhead finished second. This just shows how respected and highly thought of the Bar Sport franchise is with the leading industry experts. The award is very prestigious and although we have won it in the past the feeling of winning it once again may taste even sweeter this time around as it shows we have not let our high standards slip. It is great to be recognised as being the best in our field and everyone associated with Bar Sport is just over the moon."