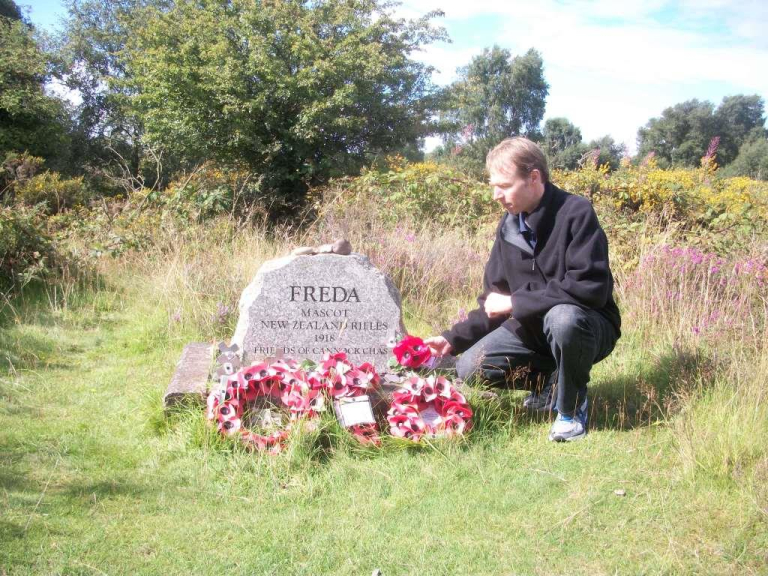 In August Cannock Chase AONB welcomed Peter Millett, author of The Anzac Puppy, which is based on the dog Freda, the mascot of the New Zealand Rifles that were stationed at Cannock Chase in the First World War.

The writer met with the Friends of Cannock Chase and members of the Landor Society, which had both helped him with his research for the children’s book.

On the visit, Peter laid a poppy spray at the Commonwealth Cemetery and one on Freda’s grave. He also had a look around the World War One Hut at Marquis Drive.

Peter was in the UK for a week on a trip arranged by the publishers, Scholastic, to the Edinburgh International Book Festival, which took place towards the end of August.

Peter Millet said: "I first came across the story of Freda's headstone being rededicated in late 2001. For portions of the last two decades I have been patiently contacting people and researching background information to create a children's book about Freda and the Anzacs.

“The highlight of this enjoyable literary journey was coming to Cannock Chase and meeting the kind folk who have supported my project and shown great interest in my long distance endeavours. I hope my book encourages a younger generation of readers to visit the Chase from down under.”

The book was inspired by the true story of Freda, a Harlequin Great Dane dog the mascot of the New Zealand Rifle Brigade at Brocton Camp during the First World War. It's a story about the reality of war, hardship, friendship and bravery. It was illustrated by Trish Bowles.

Marion Kettle, from the Landor Society and Friends of Cannock Chase, said: “After emails and phone calls with Peter, leading up to the publication of The Anzac Puppy, it was really lovely to meet him and show him the areas he had written about. We were able to help him with the final pieces of research from local archives to complete this thought provoking children’s book.”

There is an opportunity to remember working dogs like Freda at Cannock Chase AONB’s Remembrance Service. This will take place at Freda’s grave on Wednesday 11 November at 2pm.

Freda’s grave is 0.6 miles south east of Brocton Village, near Stafford. It is marked ‘Meml’ on the Ordnance Survey Explorer Map 244 – Cannock Chase and its grid reference is SJ978188.