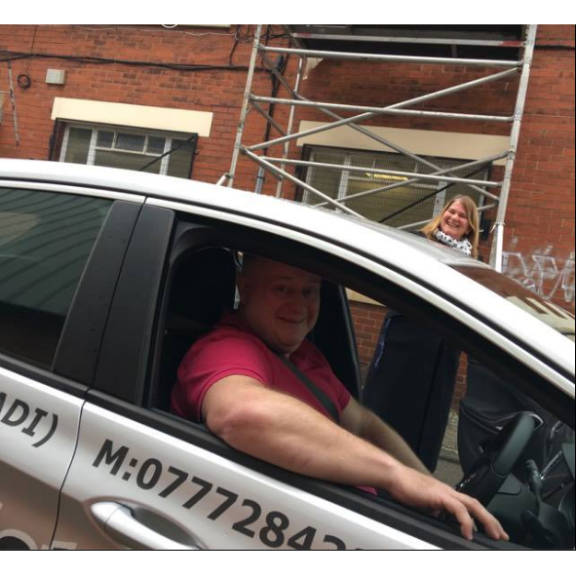 A couple of weeks ago I sat with Graham Evans, owner of Get Driving Today.
We were discussing modern day driving and that he's pretty much seen all that I could imagine, (and more) on the roads.
I'm always looking for new ways to write blogs from a different perspective.

The rest, as they say is history!

When Graham made his suggestion, I was in fact quite excited. It's not every day that you get to be a back seat passenger on a driving lesson.
Challenge accepted!

So, we planned the day and the pupil and it was all systems go.

Graham collected me from work and off we went to collect Aimee.
The first part of the journey began with Aimee in the passenger seat, (I'll explain this later).
We drove to a large estate with a very long road (on a hill). At this point, Aimee took the wheel and her lesson began. First off, a hill start!
We manouvered many a street around the estate, settling Aimee into the beginning of her lesson before approaching the main road and the challenges that lay ahead. 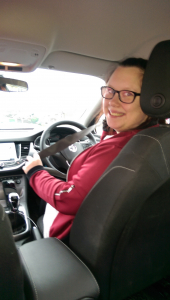 Aimee confessed that she can at times have a "melt down" if she feels anxious about the drive. I'm pleased to say that didn't happen on my watch.

The reason I accepted this rather usual invitation was this;

Graham is a client of mine and I am always quite genuinely blown away by the amazing feedback that he receives from his pupils. To witness this first hand would only enforce what I regularly heard.

Aimee had told me whilst we were on our way to the start of her lesson that she'd started learning with a different instructor.
That instructor had made her feel quite anxious when driving, wasn't encouraging, and as such, she lost her confidence and stopped learning altogether. Finding Graham has turned all that around and her life hasn't been the same since.

What I found, not surprisingly, was exactly what I'd read. Graham seems to have a unique way of dealing with his pupils. He understands their fears and concerns and adapts his teaching to them. I witnessed huge encouragement, constant positive re-enforcement, witty puns and lighthearted banter, (important) and this showed he's at the pupils level too, making them feel at ease. There were plenty of leading questions that affirm the understanding of the highway code too.
Graham's challenge with Aimee in his words are "to break down the demons" that she has in  her head, those barriers that she will overcome with Graham's continual reassurance and can do attitude. 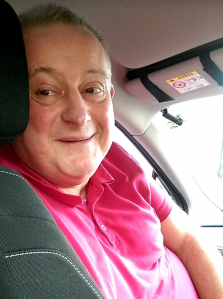 Just from speaking with Aimee, you can already see that this has started to happen.

On my journey, we took a brand new route for Aimee, I was asked which direction we should turn at the lights, I chose right (the harder choice it seems)
but hey, there's nothing wrong with a challenge. (Sorry Aimee) I thought, but I was confident it would be good for her. Graham didn't let me choose a second time for Aimee's own well being!
We ended up in Breightmet which it seemed had a number of those challenges that sometimes create the meltdowns, Aimee did incredibly well it has to be said.
One of those challenges is roundabouts.

On our return journey, we headed back to Bury to Aimee's place of work. As we approached the bottom of Bolton Road we had a little mishap and ended up in the left filter lane which took us through to Crostons Retail Park - at the top of the hill........ a roundabout!
Little did Aimee realise that she'd just thrown herself a giant curve ball and challenged herself all the more. It also meant joining another very busy road and having to pass over a further two roundabouts. She coped incredibly well and we finally set off back to work.

In fact, we didn't end up at work but at the sandwich shop over the road. Yes, we even dropped Aimee off for lunch.

I loved the fact that Aimee seemed so incredibly comfortable in Graham's presence and they'd clearly built up a great relationship in the short time that she'd been learning. Aimee said that Graham is incredibly supportive and encouraging, in fact she actually said she'd just love to stay with him longer.
Testament indeed to the fact he's just great to be around and is fantastic at what he does. Aimee has a totally different approach to her driving lessons now.
She looks forward to them, doesn't put too much pressure on herself and neither does Graham. She now looks forward to passing her test, when she's ready to do so.

So, back to that question as to why Aimee started her drive in the passenger seat?

Well, Aimee works in a business located on an incredibly busy junction. Would it be a good idea to get Aimee stressed before she even got to the end of the road? Of course not. That would not push or stretch her, only render her whole lesson pointless.
Starting at a safe place, sets the lesson off in a positive way and can only enhance the learning experience. Makes great sense doesn't it?

Some may say I was brave for getting in a car with a learner driver but do you know what, it did me a world of good. I too was once a learner driver and it makes you reflect on some of the daunting times you faced when you were in that very same position. I think we'd all be telling fibs if we didn't still have some of those moments even now, especially with increased traffic and the challenge's that it brings.

I felt very comfortable sat in the car with Aimee driving, from starting the journey to parking up.  Having the right instructor really does make all the difference in the world.

Would I learn to drive with Graham? You bet I would. He'd most definitely be my first choice. Such a nice guy, so patient, so reassuring and of course he has a fantastic reputation too.

If you'd like to find out more about Get Driving Today call  0161 956 8807. He's a busy man though so book as soon as you can to secure a lesson or you'll be sadly disappointed.

Many thanks to Graham and to Aimee for the opportunity.

Being from Bury I'm always finding out new things about our town, it's people & what's going on. It's my job to be nosy! It means I can share lot's of info with you & when someone asks me "Do you know...

Pixelwave tell us how 'The Power of Video' will Boost Your Business Success!
Sign up for offers
Sign up for what's on guide
Become an author
Popular Categories