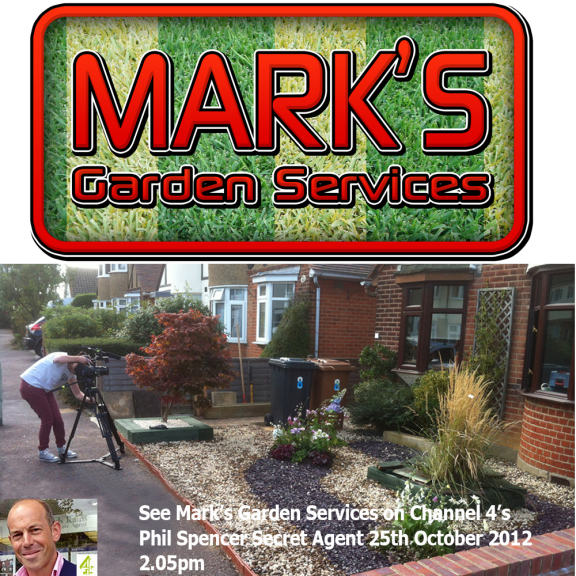 Already known as Bishop’s Stortford’s most loved business after thebestof’s ’14 Days of Love’ campaign, Mark’s Garden Services received another massive boost to its reputation when owner, Mark Stradling was contacted by the makers of Channel 4’s Phil Spencer: Secret Agent.

He explains, “On Monday 3rd September, I got a call from Raise the Roof Productions, which basically went: ‘Would you be interested in working on a project for us in Bishop’s Stortford at a house we’ve been asked to make over for the occupants to sell?’

“Now I’m not normally lost for words! However, once I’d composed myself, a meeting was arranged for the next day.”

On Tuesday, Mark met with the production team at 8 Highfield Avenue, Bishop’s Stortford, where the work was to be carried out. He was asked to put together a quote to redesign the front garden, which was in line with the budget set.

Mark immediately went to work arranging the plants and materials required for the project so if his quote was accepted, he would be ready.

On Wednesday 5th September, Mark met the film crew for the first time, as well as the man himself, Phil Spencer.

“I was miked up and Phil introduced himself to me,” Mark states. “We had a chat to break the ice, but to be honest, it was a complete blur! “Then the camera rolled and Phil and I launched into our spiel. I thought there was going to be retake after retake, but after one roll, everyone was happy.”

Mark was delighted to learn that he had been accepted to carry out the work. However, he was then told that the garden needed to be completed by the following Tuesday, and he was due to fly to Madrid to visit his daughter for a long weekend!

Mark wasted no time in organising a schedule with his workforce, Steve and Matthew so that the project ran smoothly while he was away. Day four and the organisation had started to take shape and Mark ordered the plants and materials.

With such a small budget, it was suggested that a low maintenance front garden would be most practical and appropriate. Looking at this particular garden, it was a little dull and unappealing to the prospective buyer.

Leaving on his long weekend away, Mark left Steve and Matthew to prepare the garden. Tuesday 11th September and Mark’s Garden Services was at the Bishop’s Stortford house, ready to create an attractive front garden. Mark used some of the existing materials but added variations and colour, by using coloured slate, stones and plants. He kept the existing materials in situ and pruned the garden’s shrubs. He took out an ornamental grass in order to showcase a previously hidden beautiful Acer tree. He also added an area where refuse bins could be stored and easily accessed.

A ‘goes nowhere’ path was constructed around the garden, bringing the planting areas together and gave another almost 3D aspect to the garden. The existing wooden planters were painted green to bring them into the picture. Mark’s intention was to make this a non-fussy and simple garden to create and use, which is just what was achieved.

I've been running The Best of Bishop's Stortford since 2010 and I'm passionate about supporting all things local. In particular, we work hard to showcase the best local businesses who give the area it's...

A HILARIOUS PARODY ADAPTATION OF A CLASSIC NOT: LADY CHATTERLEY’S LOVER