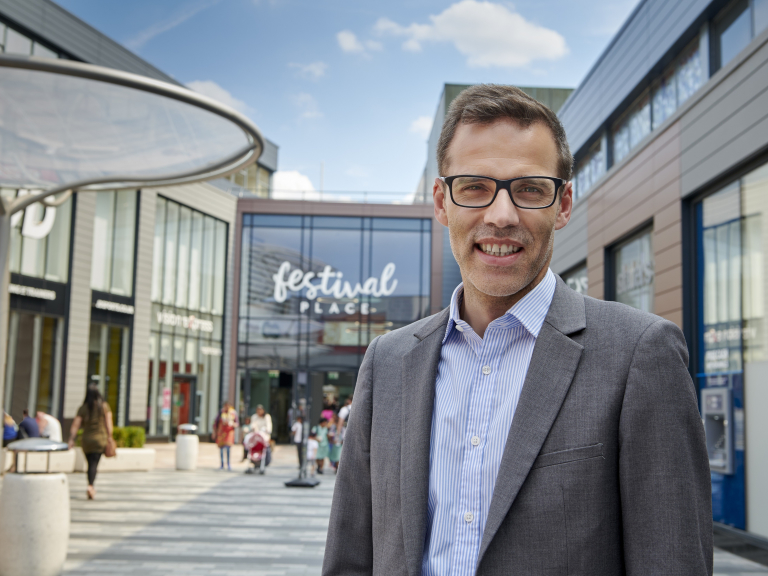 Neil Churchill has fond memories of his teenage years in Basingstoke. Now, almost 30 years on, he has returned to the town following his appointment as Centre Director at Festival Place.

Neil was a student at Basingstoke College of Technology in the early 1990s while his dad was employed at IBM, which then had a presence in the town, and his mum worked at the local Marks and Spencer.

Now, with a long career in retail management under his belt, Neil is excited to return, as high-profile brands move into Festival Place and a multi-million-pound regeneration scheme, including a revamped and much improved car park, nears completion.

Neil’s most recent role was at the successful Southside Wandsworth shopping centre in London, where he oversaw a £30m extension of the scheme. Fittingly, his return to Basingstoke comes as a major refurbishment at Festival Place nears completion.

Neil says: “I have great memories of my time in Basingstoke, and feel a very close connection to the town. I am very aware of the importance of Festival Place not just as a shopping destination, but as a town centre and an important focus for the local community.

“Wherever I have worked, I have been passionate about local communities and about ensuring the shopping destinations in those areas support them in the best work they can. I feel that particularly strongly about Festival Place as it is, effectively, the town centre and a place where members of the community work, shop, eat and enjoy themselves.

“Without them, we wouldn’t be here, and I plan to become as heavily involved as possible in local groups and organisations to ensure we deliver not just an exceptional shopping and leisure experience, but also a real community benefit.”

Festival Place recently announced that top brands Cote Brasserie and Jack Wills will be joining its line-up of retailers and food outlets. During the past two-and-a-half years, footfall has increased by more than two million, taking the annual total to 22.4 million customers.

“Of course, I am excited about continuing to build on the commercial success and reputation of Festival Place as a top 20 UK shopping centre, which is one which we are incredibly proud of,” adds Neil.

“To be able attract brands of the quality of Cote Brasserie and Jack Wills to Basingstoke for the first time is testament to the quality of the work that has been done, and is ongoing here. The completion of works to the centre and, particularly, the car park, which will make a huge difference to the visitor experience.”

As a father to two sons – one aged four and one two months old – Neil understands how important families are to the success of Festival Place.

“I live for family time, and know how precious and important that time is,” he says. “We know it is a privilege that families choose to spend their time here – whether that’s shopping, eating, watching a film at Vue or having fun at Flip Out. Making that experience as enjoyable as possible as we can is what drives us.

“The challenge ahead for us as a team is to reaffirm Festival Place as destination – attracting people from the wider catchment area for shopping and leisure while making sure that people who live in Basingstoke feel no need to go elsewhere.

“Retail is highly competitive and challenging and we know that we need to work hard to maintain and improve on our position as a Top 20 destination. It’s a challenge we’re really looking forward to.”