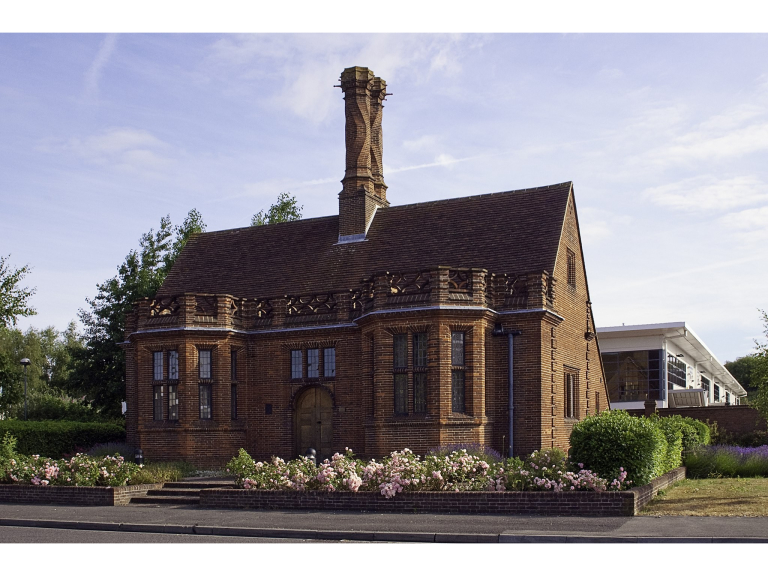 Sir Edwin Lutyens was a leading English architect known for imaginatively adapting traditional architectural styles to the requirements of his era. He designed many English country houses, war memorials and public buildings.

Daneshill House’s, fortune and its survival are owed to the fact that it was designed by Sir Edwin Lutyens one of the foremost Arts and Crafts architects at the turn of the 20th century for his client Walter Robertson Hoare. Hoare was a brewer and member of a banking family which also owned the Red Lion Brewery, East Smithfield, London. Lutyens and Hoare visited the ruins of Basing House, destroyed during the English Civil War, where Lutyens admired the colour and quality of the Elizabethan bricks from which the ruined house had been constructed and whose materials had provided bricks to rebuild the village of Old Basing. Lutyens said that he would build Hoare a house if clay could be found of the same quality. They found a local source of raw material and the brickworks was established employing 12 workmen who produced particularly beautiful narrow bricks about 10” x 5” x 1½”. Lutyens then encouraged Hoare to set up a company and The Daneshill Brick and Tile Company were formed. As well as for the immediate need it also supplied bricks for many of Lutyens’ projects including the twisted chimneys at Marsh Court, Stockbridge in Hampshire.

The Brickworks and the Brickworks’ Office Building and all of the Lutyens’ Daneshill buildings are built of bricks produced by the brickworks. Another significant building is Brickworks’ office. The Daneshill Brick and Tile Company which opened in 1903 and the office functioned as that amidst the clay pits and kilns of the Brickyard. The office dates from 1905 and a compressed version was used at the Building Trades Exhibition at Olympia in 1909 as working example of what the bricks were capable of producing in the hands of an architect like Lutyens using skilled craftsmen bricklayers.

It also has the ‘catslide’ roof so typical of Lutyens’ design. This little building is now almost lost among the commercial buildings of the Bilton Industrial Estate in Bilton Road, Basingstoke.

In 1911 the registered owners of the brickworks were W Hoare and C Chute. A railway siding off the Basingstoke to Reading line was laid into the brickworks which was producing about 700,000 bricks a year. The business closed in 1957. 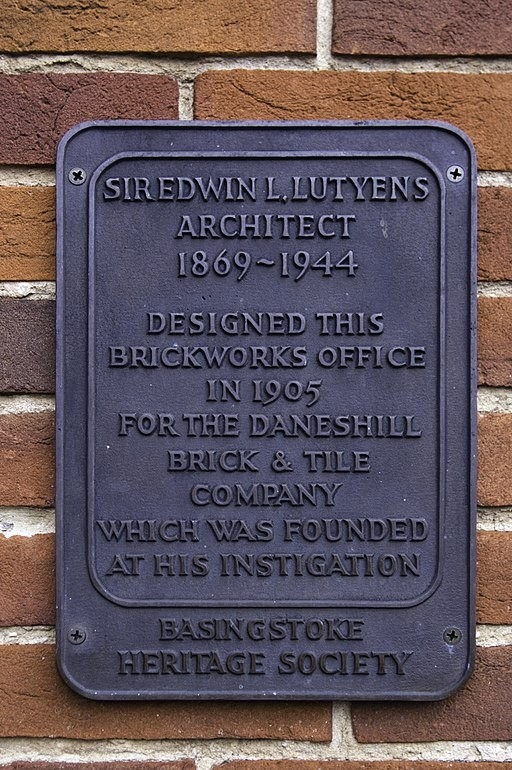 In 1975 the building was listed Grade II, but it fell into a sorry condition and in 1991, London based architects, RMJM were appointed renovate it with the Lutyens Trust ‘ensuring that enough space was left around it to provide a satisfactory setting for it.’ At the time that the Basingstoke Heritage Society put up a plaque on the building in June 2000, there was still an identifiable claypit nearby, but buildings have encroached on all sides of this little building now.