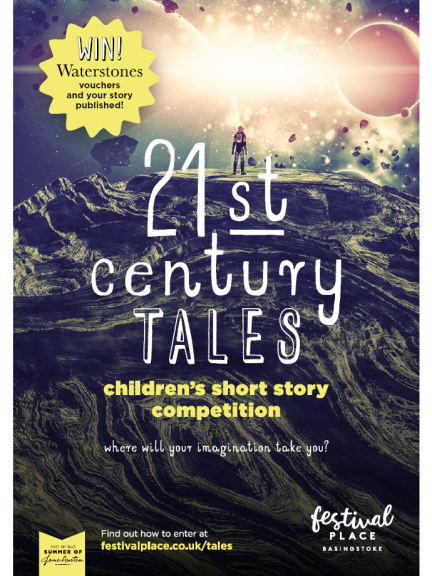 As well as being headline sponsor of the Sitting with Jane ‘BookBenches’ public art trail, now on display in Basingstoke, Festival Place is excited to be hosting a number of additional activities to commemorate the 200thanniversary of Jane Austen’s death.

On 27th July the shopping centre will be launching ‘21st Century Tales’, a month-long writing competition which will give Basingstoke’s budding young writers the opportunity to showcase their talents for the chance to win a £100 Waterstones voucher. Entry booklets will be available for collection from the Information Desk and there will be a writing area on the Upper Level where those taking part can work on their 500-word entries. There will be two age groups and a winner will be selected from each group to have their compositions published together in a special book.

Actress Emilia Fox, who has narrated many audiobooks for both adults and children, will be recording audio versions of the winning 21st Century Tales. Although perhaps best known as the star of the BBC series Silent Witness, Emilia is no stranger to the world of Jane Austen — she made her television debut in the acclaimed BBC production of Pride & Prejudice.

Continuing the literary theme, there will be a designated reading area on the Upper Level during the school summer holidays with regular readings planned throughout the month so that visitors can enjoy a story or two while they shop.

In addition, shoppers at Festival Place will have the chance to own a bit of British history by purchasing a special Jane Austen £2 coin presentation pack, now available by early release at the Information Desk for £10, including a donation to the Ark Cancer Charity. There will also be 200 of the new coins in the tills at the shopping centre, ahead of general circulation, so keep an eye on your change!

To find out more about the Sitting with Jane project visitwww.sittingwithjane.com  and to stay up to date with all the latest news and events at Festival Place visit www.festivalplace.co.uk or find them on Facebook, Twitter, Instagram and Pinterest.