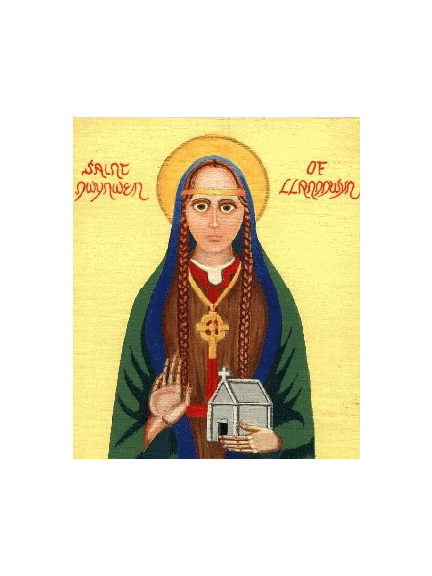 Did you know this Friday 25th January is St Dwynwen’s Day in Wrexham? If you didn’t, you’re not alone. This little known figure is the Welsh Patron St of Lovers, and lived during the 5th Century.

The youngest, and rumour has it prettiest, of legendary King Brychan Brycheiniog – King of Breconshire’s 24-daughters – Dwynwen’s tale is a familiar one. She meets and falls in love with a young prince, Maelon Dafodrill, but is unable to marry him as her father has already promised her to another.

Beside herself with grief, she begs God to make her forget Maelon, and falls asleep. An angel comes to her and brings a potion that’s meant to make Dywnwen forget her true love, and turns him to ice. God then grants her three wishes. She wishes that Maelon be thawed, that all lovers have their every dream come true, and that she herself will never marry another man.

Dwynwen them devoted herself to God for the rest of her life. She moved to Llanddwyn off the coast of Anglesey and opened a convent, where she remained there until her death. A well was named after her in 465AD, where lovers still flock to today to see if their lives will be blessed with happiness.  In the 16th Century, a church was built on the site of her convent where the remains can still be seen to this day.

St Dwynwen is also the Welsh patron St of sick animals as well as lovers.

So why not wish that special person in your life a very happy St Dwynwen’s day on the 25th January. After all, she is the real Welsh valentine.